Guest Posts
Mahler on the Jumbotron: the Berlin Philharmonic in Taipei
by Nick Frisch November 24th, 2011 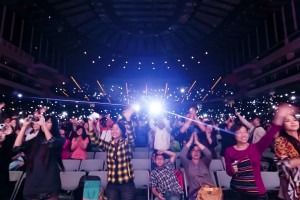 For Westerners who wonder aloud whether Asia might save classical music’s declining fortunes in the West, Friday night is the sort of thing they have in mind. When the Berlin Philharmonic kicked off Taipei’s weekend with a gripping rendition of Mahler’s 9th Symphony, the spectacle was not limited only to those with tickets to the National Concert Hall, the downtown venue where Sir Simon Rattle wielded his expert baton. In an unusual act of public outreach, the Berlin Philharmonic allowed a live simulcast of the performance to stadium-style venues across Taiwan, including the near-capacity 15,000-seat Taipei Arena (臺北小巨蛋).

The performance met the orchestra’s usual high standards: Rattle is an iconic interpreter of Mahler, and their rendition sustained a brooding energy throughout. The final movement was especially strong, drawing a breathtaking range of emotion from its distinctive winding motif and deftly devious harmonic footwork. 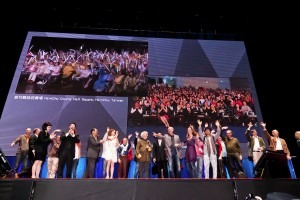 The most salient aspect of the experience for most listeners, however, was the nature of the broadcast. Since New York’s Metropolitan Opera began its wildly popular HD broadcasts, many have wondered: how suitable is classical music for the Jumbotron treatment?

On the one hand, the Arena simulcast and livestream beamed to public places across Taiwan, was thrillingly populist and exactly the kind of thing that classical music should be doing to maintain its relevance. On the other, many members of the orchestra were clearly not ready for their close-ups – when you are trying to focus on the music, perhaps a concert-hall’s distance is just right to avoid distractions that inevitably mount. Images of certain solos, and Rattle channeling the Mahler’s majesty, were certainly exciting; but this listener often felt the need to close his eyes. While the sound broadcast was very high quality, it was unclear what kind of stereo or other acoustical realism effects were attempted; certainly, there was not an especially noticeable effort to recreate the sonic effect of an orchestra onstage. There was noticeable cognitive dissonance: such a rich, realistic sound and sharp, clear picture, and yet close-ups of particular instrumentalists did not give them a sonic prominence to match the image. Petty, perhaps, but noticeable over the course of the symphony’s span, well over an hour. 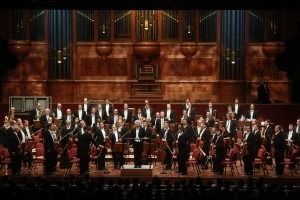 After the performance, two emcees came onstage to narrate a live video feed of Rattle leaving the National Concert Hall for a car that conveyed him to the Arena to meet the fans in person. This personal touch was a huge hit – it is hard to imagine a maestro getting such a rockstar reception in any Western country. The crowd chanted “Rattle, We Love You!”, competing in volume with crowds at other simulcast locations across the island.

Despite the occasional distracting moment (and an overloud rattling air conditioning vent that troubled some quieter moments of the score), this simulcast was an ambitious experiment that clearly met a huge popular demand. It is one well worth repeated and improving, with adjustments for audience tastes and some concessions to those who feel the experience is not enhanced by seeing more of the musicians than viewers in the actual concert hall.