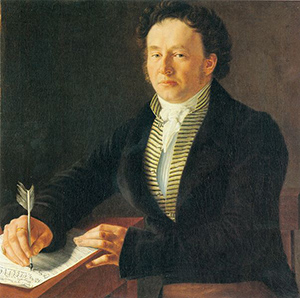 During his lifetime, Louis Spohr (1784-1859) was considered the greatest composer after Beethoven. The fact that he’s so little known today speaks volumes about changes in taste. Famous primarily as a violinist, then as a composer, his reputation did not survive his death and it wasn’t until nearly 80 years later, after WWII, that he began to come back into our ears.

Spohr started writing Lieder when he was in his late teens and, although he had a great sensitivity towards the text, he initially lacked a competent hand at the keyboard.

His collection of Six Songs, Op. 72, in 1826 is his first use of true Romantic poetry. At age 42, he was finally starting to come into his own as both a composer and a Lieder writer. Poem No. 3, ‘Ghasel’, was written by Henriette Wilhelmine Auguste von Schorn (1807 – 1869), as Adil. Von Schorn was a German poet and fairy-tale collector. The poem is one of the unrequited lover lamenting, ‘…If only she loved me…” but then concludes that the experience has been to his benefit, “Had I never loved you, I would never have loved.” The poem, as the title indicates, is a gazel, a form of Persian love poetry with a particular rhyme scheme. In doing this, Spohr was aligning himself with the early nineteenth-century fashion of using oriental or exotic inspiration.

Marjorie Patterson is a graduate of The Juilliard School and at the time of this recording in 1995, had a career in both lieder and opera, covering roles from Mozart to Wagner to modern contemporary works. 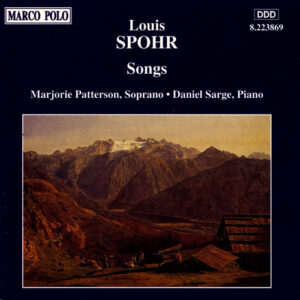