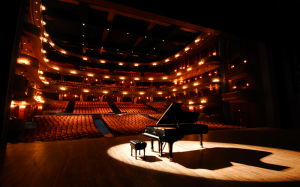 Performing can take many forms – from informal playing at home with friends to a recital at a world-renowned concert hall – and each performance presents its own difficulties, stresses, pleasures and revelations. I believe it is important to perform the music we study and play – not least because this wonderful music was written to be shared, and because, as any performer will tell you, each live performance reveals new or unexpected things about the music and you as a performer and musician.

I came late to performing, having had a long break from the piano after university. When I returned to the piano seriously, I completed two performance diplomas in my late 40s. In order to do this, and because I had not had a formal musical training in conservatoire, I had to “learn” how to be a performer (mostly by teaching myself and talking to and observing professional musicians at work).

The most significant thing I have learned is that one must be extremely well-prepared – and prepared for anything and everything that can happen, both within the music itself and all the things one cannot control. Even the best laid plans in practise can come awry in performance, for a variety of reasons. For this reason, most professional performers (and serious semi-professionals and amateurs too) will do a number of “practise” or trial performances in less important venues before the most important concert in their diary (at the Wigmore Hall for example, reputedly one of the hardest places to perform in because of its famously knowledgeable and discerning audience). Such performances are useful in “testing” a programme to make sure the combination of pieces and running order works as a concert performance, and checking one’s preparation is correct and secure. Each performance is part of the learning process and whatever happens in a performance should be seen as a point of reference for future practising and preparation (and a timely reminder that we can never truly say that a piece of music is “finished”). For example, certain passages which seemed pretty secure in practise can come unstuck, perhaps due to distractions in the venue (coughing or extraneous noises), and it can be quite a jolt to discover that one’s careful practising may not have been quite as scrupulous as one thought. For this reason, one should try not to spend too much time negatively reflecting on a performance which may not have gone as well as one hoped; instead note the areas which require improvement and incorporate these into the practising regime. Thus, through these marginal gains one can take the music to another or different level each time it is performed.

Beethoven: Piano Sonata in C, No. 21, Op 53, ‘Waldstein’. 1st movement (Maurizio Pollini)
Performing is physically and mentally demanding, and an unusual level of mental concentration is required combined with physical stamina for the duration of the performance. Interruptions to one’s focus, such as noises in the hall, an error or memory lapse, or negative self-talk, can throw a performance off track and one sometimes has to muster huge forces to bring one back to the task in hand. This is why we must practise so meticulously, to make the music as secure as possible, so that we don’t break down or stop in performance (something I have only witnessed once in a professional performance, though I have encountered numerous but tiny errors or memory slips).

In addition, the stress and anxiety of performing does not pass the moment one leaves the stage. It can take some hours for the body’s stress hormones to return to their normal levels, which can leave one feeling jittery, restless, irritable and sleepless – despite one feeling physically and mentally drained. I have found isotonic drinks such as Gatorade help alleviate the physical and emotional effects of performing (these products have been proven to offer enhanced recovery to patients undergoing complex surgery).

Finally, one should try not to negatively “post-mortem” a performance too much. It has happened, in the moment, and now it is over and one should look forward to the next opportunity to present one’s music in concert. Compliments and generous feedback from audience members, colleagues, teachers and friends can make a huge difference to one’s attitude to a performance and help maintain a positive mindset. And I find the best “cure” for that special post-concert depression is to get back to the piano.

“At this low point, we have only to let music itself take charge. For every challenge we can possibly want lies before us in the vast and inexhaustible repertory that cannot but replenish our spirit. For true musicians, depression is temporary because their music is permanent.”

Seymour Bernstein, pianist & teacher, from ‘With Your Own Two hands’