Artists Behind the scenes
Life on the Road III
by Oliver Pashley March 9th, 2018 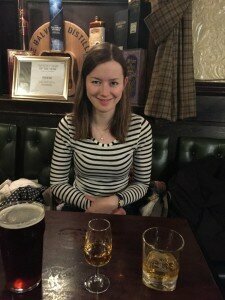 Life on the road sometimes takes unexpected turns. As we left the first part of our tour diary, midway through our week of six concerts in six days in Scotland, our singer had just lost her voice. Rapid replanning of our recital was underway, with us fashioning lunchtime recital and full-length evening concerts out of our existing trio repertoire, coupled with a few solos Anne and I had up our sleeves. Read on to find out how we fared… 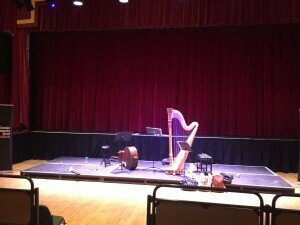 Following our concert in Crief, we piled back into our cars and arrived into Glasgow for our lunchtime concert at the University (following our composers’ workshop there earlier in the week). Our forces were reduced to a trio, and the programme was reworked the night before, but we played to an incredibly enthusiastic audience – the series in Glasgow is incredibly well-supported – and took the opportunity to air some of the pieces that eventually made it into our evening recital programme (lunchtime concerts are 45 minutes to 1 hour in length, whereas an evening concert is usually two 45-minute halves).

A late lunch after the concert, and Heloise made the wise decision to return to London… and then there were three! We had the evening off, and took advantage of being in one place for more than a few hours to finalise our evening recital programme, holed up in one of Glasgow’s many whisky bars.

Three down, three to go! A not-too-long drive later, and we’re in Falkirk for our fourth gig.

The heating for the building was pumping all afternoon, an unfortunate side effect of which was a convection current drawing a draft of cold air across the stage, making things very chilly! Fortunately, this was resolved before the concert, and we played to another wonderful audience. 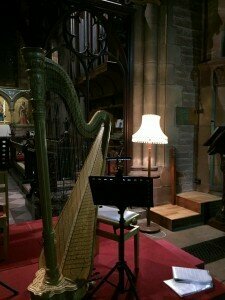 A chilly church in Dumfries, completed with reading lamp

Dumfries welcomed us for our penultimate concert, in a church with three minutes’ walk from our guest house – always a bonus! The church was chilly upon arrival, which is not an uncommon problem (as many musicians will no doubt agree). This is often compounded when our instruments react differently to the change in atmosphere: Anne’s harp goes sharp, while my clarinet sinks in pitch, meaning care must be taken not to rehearse for too long in the cold space without giving the instruments time to adjust to their new surroundings. The audience gave us another warm welcome, and the concert went ahead with no pitch issues! The end is now in sight: one more to go! 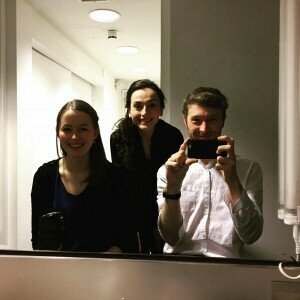 All ready for our final concert in Peebles!

Our final concert has arrived. We set off bright and early for Peebles, where we had an afternoon concert to round off this whacky week.

The drive was fairly treacherous, as Scotland had been hit with a bout of snow the night before, so it took us slightly longer than expected. Nevertheless, we arrived in plenty of time to get set up for the concert. 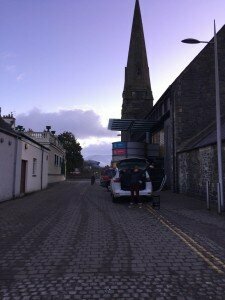 Success! (Spot the harpist) Now for the drive home…

I arrived into London at 6.30 the next morning, and headed straight home to do my laundry (amongst other similarly exciting things) – Hermes are off to Cardiff tomorrow for a concert, so there’s a fairly quick turnaround.

Through the tiredness shines a feeling of satisfaction: we made it! Six concerts in as many days, with a few hiccups along the way – but I couldn’t have been left in the lurch with lovelier people. As I mentioned in my introduction, it’s the people that make or break a trip – and this was never truer than in the last few days. Our audiences were also really understanding, which made the experience of zooming up and down Scotland to new and unknown places much easier for us.

I hope this has shone a little light onto the life of a musician on tour; because we travel so much, we often take what we do for granted, but then you suddenly remember that it is fairly unusual to drive for six hours, have a half-hour nap and then play a full-length evening recital all in the same day. Seeing the world as you work is such a privilege, but for now: laundry and bed!