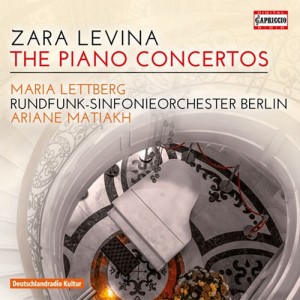 Piano Concerto No. 1
I. Allegro

Levina: Piano Concerto No. 1 – I. Allegro

Zara Aleksandrovna Levina was a pianist and composer. She was from a Jewish family. Zara Levina studied piano in the Odessa Conservatory, which she passed with a gold medal. She graduated from the Moscow Conservatory in 1932, where she had studied piano and composition.

In her early age, Zara Levina admired the composers Rachmaninoff, Scriabin, Prokofiev, Beethoven and Schumann. She mainly wrote choral works (mostly romances, then children songs) and, besides, also other vocal music, as well as two piano concertos and solo piano works. The inspiration of those five composers is evident throughout her works. Both of her piano concertos have been recorded, as has her 1928 first violin sonata (by David Oistrakh).