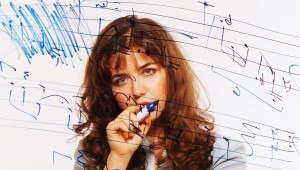 Russian-American composer and pianist Lera Auerbach is one of the most exciting new voices among today’s young composers. Characterized by its stylistic freedom and juxtaposition of tonal and atonal musical language, Auerbach’s music explores a wide range of forms and genres of music from opera to chamber music. She is also a prolific writer of three volumes of poetry and prose. Her ballet The Little Mermaid (choreography: John Neumeier) originally commissioned by Hamburg Ballett and the Royal Danish Ballet, has been performed over 100 times world-wide since its premiere in Copenhagen in 2005 and has received its acclaimed US premiere with San Francisco Ballet. She has been the Composer in Residence with the Staatskapelle Dresden since the 2011/12 season.

Born in 1973 in the city of Chelyabinsk, Auerbach began writing her first opera at the age of twelve. She moved to the United States in 1991 where she studied piano with Joseph Kalichstein and composition with Milton Babbittat at The Juilliard School. In addition, she attended classes in comparative literature at Columbia University. Her musical talents brought her high recognition including the prestigious Hindemith Prize by the Schleswig-Holstein Musik Festival in Germany and Deutschlandfunk’s Förderpreis. Auerbach is the youngest composer to be presented by the acclaimed music publisher Hans Sikorski.

Being a virtuoso performer herself, Auerbach has been engaged as soloist worldwide. She has previously appeared at venues such as the Lincoln Center in New York, Symphony Hall Chicago, Moscow Conservatory, Tokyo Opera City and Herkulessaal München. She made her Carnegie Hall debut in 2002, performing her own Suite for Violin, Piano and Orchestra with Gidon Kremer and the Kremerata Baltica. Her music has been presented at Carnegie Hall each season since then. She will be presenting the world premiere of her piano concerto with Stuttgart Philharmonic under Christoph Poppen this year. 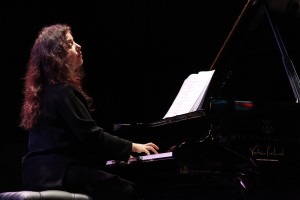 Auerbach’s work has been performed by conductors including Charles Dutoit, Andris Nelsons and Andrey Boreyko and by orchestras including the New York Philharmonic, Tokyo Philharmonic, Bamberger Symphoniker, and Radio-Sinfonieorchester Stuttgart. Her recently completed compositions include her Symphony No. 1, Chimera, which was commissioned and premiered by the Düsseldorf Symphoniker; Symphony No. 2, Requiem for a Poet, commissioned and premiered by the NDR Radiophilharmonie Hannover; A Russian Requiem co-commissioned by Musikfest Bremen, Philharmonische Gesellschaft Bremen and Semana de Musica Religiosa Cuenca and premiered by the Bremer Philharmoniker. She has been Composer-in-Residence at the Bremer Musikfest, at the 20th Anniversary Pacific Music Festival in Sapporo, Japan, Lockenhaus Music Festival in Austria, Les Muséiques Festival in Basel, and with the Orchestra Ensemble Kanasawa in Japan. She has also written works for the Schleswig-Holstein Musik Festival, Verbier Festival, Caramoor, Lucerne Festival and the Aspen Music Festival and has been Artist-in-Residence with the Deutschlandfunk.

Auerbach – Prelude No. 3 in G major