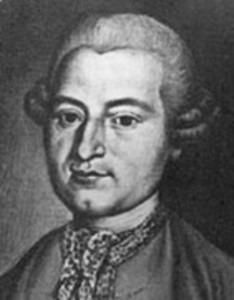 Concerto for Oboe and Harpsichord in F major, Badley F1

Leopold Hofmann (1738 – 1793) was an Austrian church musician and composer of instrumental music. His symphonies, concerti and chamber works were played all over Europe. He was regarded by his contemporaries as one of the more gifted and influential composers of his generation.

Born in Vienna, Hofmann is the son of a senior and highly educated civil servant. His musical talents were shown early at the age of seven when he joined the chapel of the Empress Dowager Elisabeth Christine as a choir member. He received an extensive musical education studying keyboard, and later composition, with Georg Christoph Wagenseil. He also studied violin with Giuseppe Trani, teacher of Carl Ditters von Dittersdorf.

Hofmann was a figure of considerable consequence in Vienna’s music scene. He became the music director of St. Peter’s Church and was appointed as the keyboard teacher to the Imperial family in 1769. Three years later, he became Kapellmeister at St. Stephen’s Cathedral. With his many other lucrative posts, he confidently declined the position of musical directorship of the Imperial Chapel. However, in 1774, following the unexpected death of Florian Leopold Gassmann, his stance was altered. He decided to petition for the post, which was declined even though he was recognized as the best-qualified candidate.

Although a church musician by profession, Hofmann was regarded as an important and prolific composer. His earliest known compositions include symphonies, flute concerti and a number of small-scale sacred works in the late 1750s. By 1760, his reputation had spread well beyond Vienna when Sieber, the Parisian publisher, printed six of his symphonies that year. A number of the great Austrian Monastic houses including Göettweig also began seeking out and collecting his works. During his tenure, Hofmann continued to compose concerti for various solo instruments including keyboard, flute, oboe and cello, in addition to chamber music. It was only until the last decade of his life that he eventually ceased writing music because of his deteriorated health. On 17 March, 1793, he passed away peacefully at the age of 55, with Albrechtsberger being appointed as the new Cathedral Kapellmeister.