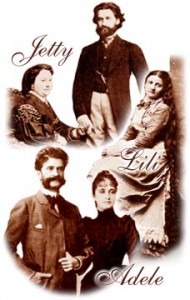 Psychoanalytical models suggest that a human being, emotionally responding to the loss of a loved one, undergoes a process of grieving that involves various stages. The first two stages, so we are told, involve denial and anger. As it happens, the death of his beloved wife “Jetty” Treffz on 8 April 1878 elicited a textbook response from Johann Strauss Junior. Initially, he refused to believe that she was dead, and did not even attend her funeral, which had to be organized by his younger brother Eduard. Once denial turned to anger, which seemingly happened in a matter of minutes, the female population of Vienna bore the brunt of his rage. At least, the profits of the local bordellos skyrocketed over the next couple of weeks!


Surely still part of the denial/anger stage of dealing with grief, Strauss Junior quickly got engaged to Henriette Angelika Diettrich, also known as “Lily”. A slender young actress with Rapunzel-like blond hair, “Lily” had recently celebrated her 20th birthday. Local gossip suggested that “Lily” had been intimately acquainted with Strauss Junior prior to his wife’s death. Be that as it may, she certainly hoped that Strauss Junior could get her a lucrative acting engagement at the Theater an der Wien. What she really got, initially, was an invitation to his bedroom and on 28 May 1878 wedding bells rang in the Karlskirche. Soon the couple moved into a new Palais — incidentally designed by “Jetty” — and things became complicated. While he was busily writing music and conducting his orchestra, she roamed the streets of Vienna in the company of handsome young military officers. The local press quickly dubbed her “Diabolika”, and she was said to effortlessly combine the qualities of Eve and Jezebel. Predictably, things were deteriorating on the home front. He called her a whore and a crumpet, she called him an old impotent man, and the domestic peace was shattered forever. In December of 1878, Strauss Junior had managed to get his operetta “Blind Kuh” (Blind Man’s Buff) premiered at the Theater an der Wien. Once “Lily” had gotten into the trousers of Franz Steiner — the director of the Theater an der Wien — however, Strauss’ works were no longer welcome, and one of his most famous operettas “Eine Nacht in Venedig” (A night in Venice) had to be premiered in Berlin instead.


During the disastrous four years of their marriage, Strauss must undoubtedly have passed through the next two stages of dealing with his grief. One might even suggest that his hasty marriage to “Lily” was part of an initial bargaining process that quickly turned into depression. The fifth stage is generally acknowledged to contain an element of acceptance. In the case of Strauss Junior this meant — not entirely unexpected — a stormy affair with a much younger women. This time, it was the widowed daughter-in-law of his banker Albert Strauss — no relations. When he announced his engagement to Adele Deutsch in 1887, it created a scandal. Strauss Junior was still married to “Lily”, who in the meantime had left Steiner and sought to return to her husband. She was unwilling to grant him a divorce, as was the Catholic Church. However, Strauss was now in his final two stages of dealing with his grief over the loss of “Jetty”. He had decided to start all over again and create a new life for himself. He traveled to Coburg, renounced his Austrian citizenship and became a follower of the Protestant faith. His divorce from “Lily” was quickly granted, and he married Adele within days. Strauss described his new marriage as “the best of them all”, and the union inspired some of his most memorable compositions, including the “Kaiser Walzer” (Emperor Waltz), and “Auf’s Korn” (Take Aim). He even composed his opera “Ritter Pázmán” (Knight Pazman) — based on a Hungarian narrative poem — and was working on the ballet “Aschenbrödel” (Cinderella) when pneumonia ended his life on 3 June 1899. We know that Strauss Junior was greatly admired by Richard Wagner, Richard Strauss and Johannes Brahms, yet we may rightfully assume that Sigmund Freud also learned a thing or two from the undisputed King of the Waltz.