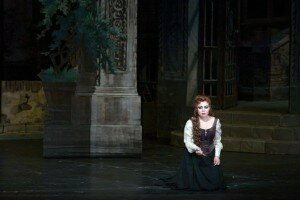 Berlin’s Deutsche Oper, the opera company based in the Western section of the formerly divided city, put on grand opera at its most opulent with Amilcare Ponchielli’s La Gioconda. Rarely performed these days due to the work’s staggering length, large cast of principals, enormous crowd scenes, extensive ballets and barely believable story, the Deutsche Oper decided to deliberately celebrate all that. 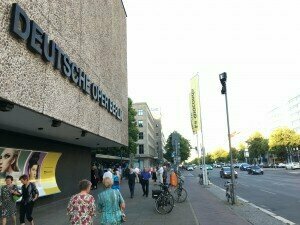 Unabashedly pulling up a 1974 production by the late Italian director and scenographer Filippo Sanjust (1925-1992), the Berliners used scenery hailed as “original decor from the time of the creation of the opera” which would be 1875. Though the program notes clarify that the sets were not truly from that era and likelier from 1933, they hailed from the successor studios (Camillo Parravicini) that probably made the original sets. The fantastically ornate sets consisted principally of hand-painted backdrops, using clever trompe l’oeil effects to wonderful effect. As a museum piece on how opera used to work, these sets were definitely effective, triggering spontaneous audience applause and plenty of conversation material, crucially important during the three very long intermissions. 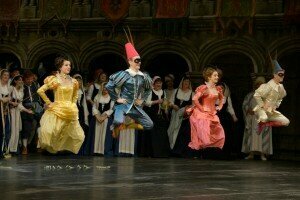 The direction was also unapologetically 1970s. Singers largely stood and delivered with classic operatic poses, and most of the movement onstage came from the numerous dance numbers, including the excellent 3rd act Dance of the Hours. No cuts to the score were made, and the theatre allowed itself the luxury of unhurried curtain calls after every act. 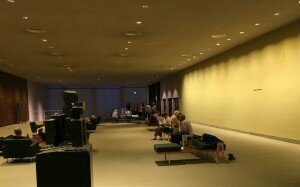 He Hui led the cast as the Venetian singer La Gioconda. The role perfectly fits the Chinese soprano’s timbre and natural range, and she sang with beauty and elegance. Enzo Grimaldi, the Genoese nobleman who the singer suffers an unrequited love for, was sung by Korean tenor Alfred Kim, a regular on the German opera circuit. He possesses a large voice of occasional beauty, but often sounds pressed. His long-lost lover Laura (who is inconveniently married to the Head of the Inquisition in Venice) was played by Daniela Barcellona, the acclaimed Italian mezzo. 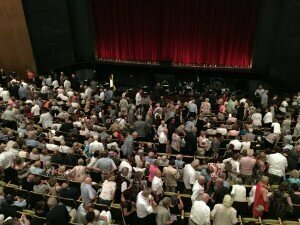 George Gagnadze, a distinguished baritone, delivered a precisely sung Barnaba, the Spy of the Inquisition and central evil character of the opera. Ievgen Orlov impressed with his roaring bass as the Inquisitor Alvise Badoero. La Gioconda’s blind mother (just another plot twist!), was well portrayed by Judit Kutasi.

Mostly grey-haired regular opera-goers filled the theatre and patiently sat through the long performance, interminable intermissions and enjoyed opera-going like in the 1970s, when time didn’t seem to matter quite as much.