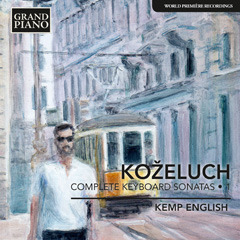 Few composers exemplified the late eighteenth-century Viennese keyboard style better than Mozart’s contemporary, the Czech composer Leopold Koželuch. A leading performer and teacher, he was even offered Mozart’s former post as court organist to the Archbishop of Salzburg. Preferring instead to preserve his independence, he produced over four decades, a series of major sonatas for fortepiano and harpsichord worthy to stand beside those of Haydn, Mozart, Clementi and Dussek, and as a precursor to those of Beethoven. This is the first volume of the complete recording of Koželuch’s 50 keyboard sonatas.