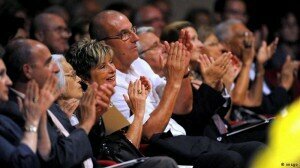 I keep meeting people who tell me they “just don’t get” classical music. Or that they “don’t understand” classical music and therefore cannot appreciate or enjoy it (an attitude which I think is inculcated early on in school and does nothing to help debunk the notion that classical music is inaccessible, highbrow and for the select highly educated few). Many people seem to believe that specialist knowledge/training is necessary to “get” classical music – apparently I have this because I am “educated” and therefore “get” what it is “all about”.

It’s true that classical music asks more of its listeners than pop music (just as it demands more of the musicians who play it). It has more complex things to say than a 3-minute pop song and can communicate the breadth and variety of human experience for which words don’t always suffice. Some people would like you to believe that listening to Bach’s complete Well-Tempered Clavier is akin to reading Plato or Shakespeare, that this music is going to transport you to “a higher plane”…

But it doesn’t matter if it doesn’t – because all the music is asking of us, fundamentally, is that we simply listen to it.

Unfortunately, the rather ingrained rituals and customs surrounding classical music can turn the listening experience into a minefield of etiquette for the ingénue concert-goer: when to remain silent, when to applaud, what to say during the interval, and even what to wear for the concert can turn the experience into one of enforced appreciation carried out in hushed reverential silence rather than something pleasurable. It doesn’t have to be like this (and these barriers are generally not imposed by the musicians who simply want people to come to their concerts). I often tell first-timers at classical concerts not to worry about what other people are doing or saying, but to simply open their ears and listen to the music.

Back in September 2018, The New York Times ran an article entitled ‘5 Minutes That Will Make You Love Classical Music‘ and invited a number of “big names” in classical music today, including John Eliot Gardner, Nico Muhly and Daniil Trifonov, as well as some of the newspaper’s editors and writers, to select pieces that might persuade someone to try classical music. It’s an interesting and eclectic selection that includes works by Unsuk Chin, Steve Reich and Olivier Messiaen, rather than the standard “pops” of the classical canon (Beethoven’s Moonlight Sonata, Verdi’s Nessun Dorma, or the Flower Duet from ‘Lakme’ for example). With the exception perhaps of the excerpts from Stravinsky’s Firebird suite, all the music in this selection is accessible and melodic. No “squeaky gate” atonal music here! As such, it’s a good broad introduction for the classical music newcomer and proves that the genre, in all its infinite variety, offers a very pleasant listening experience. And no prior knowledge or specialist education is required.

We don’t have to “get” classical music to enjoy it, and it really doesn’t matter if I feel something close to transcendence when I listen to Messiaen but you do not. It’s not a contest in who feels or thinks the most profoundly in response to the music. I’m not sure I really “got” a performance of Tchaikovsky’s Pathetique Symphony at Birmingham Old Town Hall as a child of about 10, sitting in the choir stalls behind the orchestra (because I liked to watch the percussion section at work), but the experience remains very memorable. I think part of the reason why I have always been receptive to classical music is that my parents never expected me to “get” it and going to concerts was never regarded as some kind of educational activity, but rather an experience my parents hoped I would enjoy: they were right, I did. And still do.

All the music asks of us is that we to listen to it.