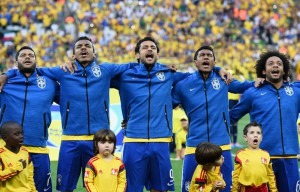 FIFA limits the songs to only 90 seconds in order to get the games up and going, but most national anthems are longer than that; the Hino Nacional Brasileiro is no exception. Largely ignoring the fact that the music has stopped, Brazilian fans have taken to finishing their anthem a cappella, fervently, raucously, and in unison.
The practice started in 2013, when Brazil faced Mexico in the Confederations Cup. In a show of extreme support for the team, 60,000 fans spontaneously continued to sing the national anthem even as the speakers stopped blaring.

This year’s official World Cup anthem failed to become a hit even with the tried-and-true pairing of Pitbull and Jennifer Lopez, on the other hand the Brazil National Anthem has managed to find a way to raise its profile. Videos of enthusiastic fans singing the anthem passionately during the World Cup definitely helped, with Forbes Magazine going so far as to calling the national anthem the tournament’s ‘unofficial hit single’.

The music to Hino Nacional Brasileiro was written by Francisco Manuel da Silva in 1831; the lyrics we hear today, by Joaquim Osorio Duque-Estrada, were not written until 1921, 91 years after the anthem’s first introduction. The anthem also replaces an earlier, lesser-known piece that was written by Brazilian emperor Pedro I, and used from Brazil’s proclamation of independence in 1822 until Pedro I’s abdication in 1831.

The exact date Francisco Manuel da Silva wrote the music that we now know as Brazil’s national anthem is unknown. Some historians put it at 1822-1823, a few months before the proclamation of Brazil’s independence; while others argue the composition was composed the year it was presented to the public in 1831, as a hymn to bid farewell to Pedro I and to celebrate the accession of Pedro II to the throne on April 13, 1831.

What we are certain is that the patriotic march, with romantic flair akin to a Rossini opera, was first sung on April 13, 1831 to lyrics written by Appeals Judge Ovídio Saraiva de Carvalho e Silva. But with parts of the lyrics referring Portuguese imperialists as ‘monsters’, the lyrics were not very popular and soon fell into disuse. Several attempts to find a new set of lyrics failed, and for a long time after that, Brazil’s national anthem existed as a lyric-less anthem that was played in all formal ceremonies and diplomatic events. 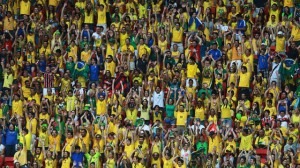 In 1889, after Emperor Pedro II was ousted and the Republic of the United States of Brazil announced, Brazil’s new leaders held a competition for a new version of the anthem, but none pleased then president Marechal Deodoro and da Silva’s composition continued to be played. Duque-Estrada’s lyrics, first proposed in 1909, were finally declared officially in 1922. It is a romantic declaration of love for Brazil, an ode to the motherland, with lyrics describing Brazil ‘an intense dream, a vivid ray’ and ‘thou art a beautiful, strong and intrepid colossus’.

An anthem by definition is a rousing, uplifting song identified with a group, country, or cause. For millions of Brazilians, it is both a show of patriotic pride and a rallying cry for a better-governed country. It began during Brazil’s two-decade military dictatorship in 1964, where there was heavy censorship and repression. Students began singing the national anthem during protests because police were reluctant to start beating them while they were singing the anthem.

It was sung again in the 1984 ‘Directas Ja’ movement, when hundreds of thousands of Brazilians took to the street to demand the right to elect their own president. Again in the 1990s, Hino Nacional Brasileiro was the song of resistance during the impeachment trial of former president Fernando Collor de Mello. Just last year, international audiences were treated to a breathtaking rendition of the anthem at the Confederation’s Cup, when television stations around the world captured the unified a cappella singing, a rare display of solidarity in a country racked in nationwide protests.

This year’s World Cup has not seen protests on the same scale, but public discontent remains high, with many people holding the view that the money spent on the tournament would have been better spent elsewhere.

“That’s not the World Cup’s fault; it’s our politicians’ fault,” Maria Ivanilde Oliveria told the New York Times in an interview. “But I can say that the money spent on the Cup, well, it could have been spent on better things.” Her home, which is located across a highway from the $450 million Arena das Dunas stadium in Natal, has no electricity.

“The anthem reminds us of that.”