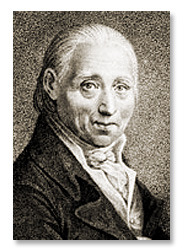 If you have ever wondered about the competitive nature of the music business in the 18th Century, Johan Baptist Vanhal (1739-1813) would be a good person to ask.

He rubbed shoulders with the most important and influential musicians of his day, composed at least 76 symphonies, over 60 masses and other religious works, two operas, six sets of string quartets and various concertos for violin, viola and double bass. His symphonies were performed around the world, including the United States, yet he died impoverished and in utter obscurity.

Vanhal was born into peasant servitude in the small town of Kralove, Bohemia in 1739. His family, probably of Dutch origin, recognized his musical talent and encouraged musical instruction and the study of the German language in order to prepare him for a musical career in Vienna. At age 13 he became organist and eventually choir director in the town of Niemczowes, and his first compositional efforts yielded several concertos for violin and for organ, in which the young master performed as the soloist. Some of these compositions are said to have attracted the attention of the Countess Schaffgotsch, who sponsored Vanhal’s move to Vienna in 1760/61. He took musical instructions from the highly acclaimed composer and violinist Carl Ditters von Dittersdorf in 1762/63, and was listed as first violinist in a performance of Gluck’s Orfeo in 1763.

Vanhal quickly established himself as one of Vienna’s leading composers, acquired a post with the Burgtheater orchestra and gave music lessons to distinguished students, including Ignaz Pleyel. Under the patronage of Baron Riesch of Dresden, Vanhal embarked on a two-year journey to Italy in 1769. There he met Christoph Willibald Gluck and composed at least two operas to libretti by Pietro Metastasio; regrettably, these works have not survived the ravages of time. While in Rome, he also met the Viennese Court Opera composer Florian Gassman, who was recalled to Vienna in late 1770. Sensing an employment opportunity, Vanhal cut his Italian excursion short and returned to Vienna with Gassman. His instincts seem to have been correct, because Joseph II offered him a posting. For one reason or another — some scholars suggest that Vanhal suffered a severe mental breakdown — the composer declined. He was also offered the Kapellmeistership in Dresden, but instead decided to take up the offer of a new patron, Count Ladislaus Erdödy of Varazdin.

Vanhal spent the next ten years of his life in comparative isolation before once again returning to Vienna in 1780. He resumed his free-lance compositional activities and produced a large number of religious works. He also continued his teaching activities, but in the end, simply faded from view. There can be no doubt that Vanhal was among the most prolific and highly regarded composers in the second half of the eighteenth century. The English musicologist and travel writer Dr. Charles Burney met Vanhal in 1772 and reports on the “composer’s spirited, natural, and unaffected symphonies.” He also considered Vanhal an “excellent composer whose quartets and other pieces for violins deserve a place among the first productions, in which unity of melody, pleasing harmony, and a free and manly style are constantly preserved.”

Most famous, perhaps, is the contemporary account of the composer Michael Kelly. When Wolfgang Amadeus Mozart tried out his newly composed “Haydn” string quartets during an evening of domestic music making, Joseph Haydn and Ditters von Dittersdorf played the violins, Mozart the viola, and Vanhal the cello. Mozart apparently not only respected Vanhal’s performing abilities, he also valued him as a composer. We know, for example, that during his concert tour to Augsburg in 1777, he performed the Vanhal Violin Concerto in B-flat major. It has been suggested, that Vanhal’s best compositions “combine Italian, German and Bohemian elements, infused with melodic charm, rhythmic control and a delicate feeling for thematic contrast.”

Vanhal certainly contributed to the rise of the “Viennese Style,” yet to survive in a highly competitive world without copyright protection took nerves of steel, an acute sense of business and a good portion of luck. In the end it seems Vanhal had neither.