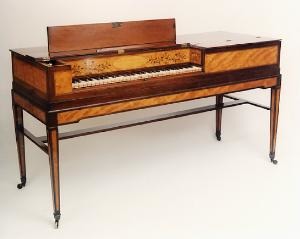 We all know what a piano looks like – large and square, if it’s an upright; or large and black, if it’s a concert grand. Yet, through the years, piano makers have done many explorations into the design of piano cases. Sometimes these changes have to do with how the designer imagined the instrument would fit into a household, such as the 18th century square pianos that could double as a table. 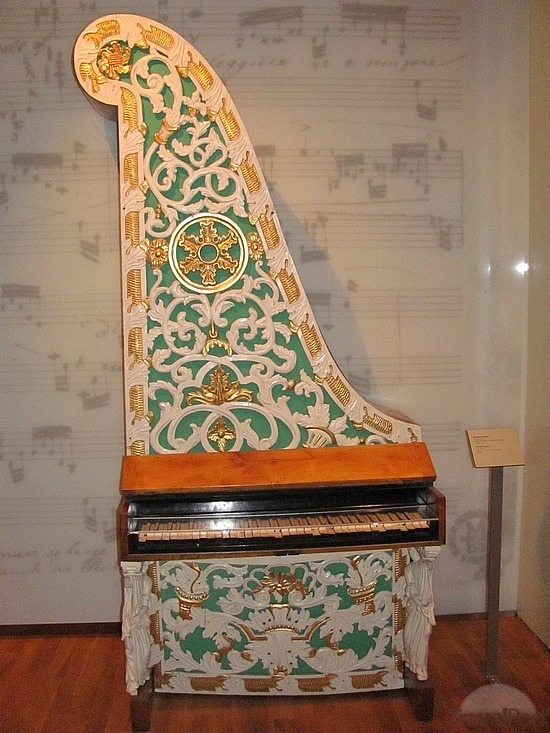 Put a cloth over the top of this and it serves as a very nice side-table, placed against the wall, as it was intended. And then, when you’re in the mood for some entertaining, there’s a lovely little piano just to hand.

But, if you wanted to combine the triangular aspects of a grand piano with the slim profile of an upright, piano designers came up with the giraffe piano. The triangle fits against the wall, you don’t lose a lot of floor space, and you have some freedom for decoration. Sometimes the fronts were painted, other times they had inlaid woods or silk fabrics. Your imagination could run much wilder than was possible with the usual black behemoths.

Now, let’s go for elegance. In this Lyraflügel made in Germany in the early 19th century, we see the lyre-shape of the foot pedal support echoed above in the case design. The lyre design also made reference to the lyre imagery in the poetry of Biedermeier Berlin.

The modern designer George Dettinger has designed an outstanding upright piano that is a mix of beautiful woods and the flowing designs of the Spanish artist Gaudi.

And then we can return to the past with this piano table by contemporary designer George Bohl. 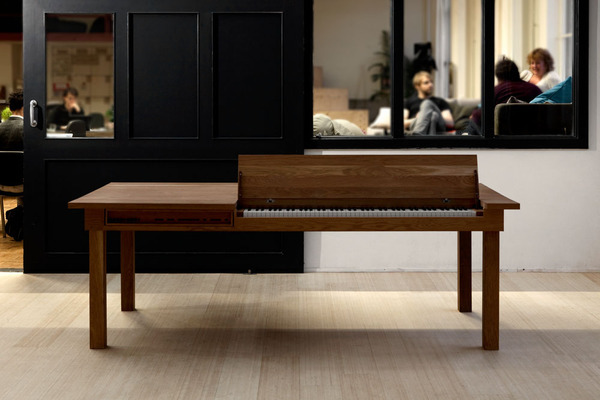 The design arm of Porsche got together with the piano maker Bösendorfer to make an interesting looking piano – rather like a blanket laid over the piano, but with stainless steel legs that take it into the industrial era. The whole effect is ancient and modern all at once. 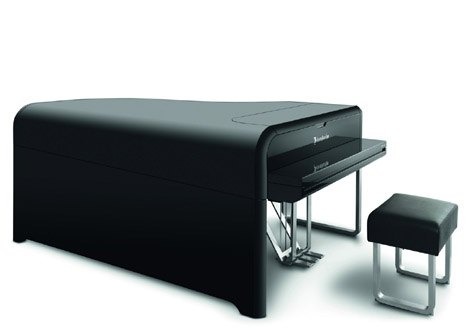 But what’s the most modern you can go? We think it’s a piano without legs, first shown in 2008. The piano itself weighs half a ton, so how can it be supported? If you start to think about suspension bridges, then you have your first clue to its construction. 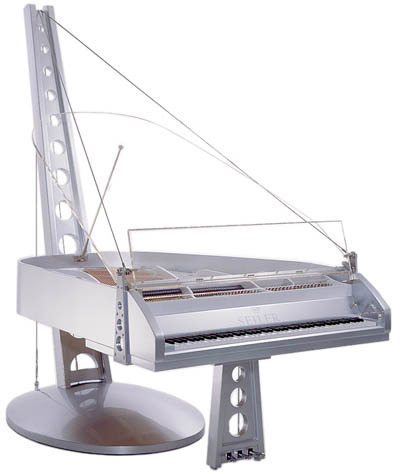 The German maker Seiler mated his piano design with contemporary brutalism and a technical imagination. This isn’t the piano for your living room, but rather a piano that you design the rest of the house around! What we don’t understand is the way the lid lifts straight up – there’s no chance of being able to direct the sound into the audience if it were on a concert stage – but then the whole piano is so impressive that the audience is probably up on stage surrounding the piano anyway!