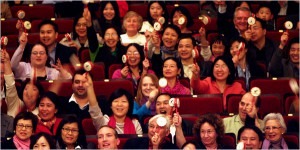 Even now, I often see our press and expert critics sigh about the behaviour of audiences when they talk about concerts, as if whether they applauded between movements is the only standard by which to judge how civilised they are. Just as often, I hear western touring agencies or orchestra management teams comment after the concert about how relieved they are that the audiences behaved well, making jokes about how our venue staff hold signs that read “Photography Forbidden” within the auditorium.

Sometimes it seems to me as if these orchestras come not to perform, but to train and educate our audiences in correct behaviour. Of course, I don’t believe that they really mean it that way.

Yes, I agree that concerts require silence, because the musicians should not be disturbed. I also agree that photography should be prohibited for the same reason. But is it right for our press and so-called experts to judge our audiences purely on standards like these?

It might have been true that ten years ago, we didn’t know to keep silent during concerts. In fact, there weren’t many opportunities to attend live concerts anyway. These days though, I think it’s apparent that not only has the number of music lovers grown, but also that the audiences willing to buy tickets are increasing rapidly. Because our population is so large, sometimes it is hard to see a rising numerator.

As an aside, it’s worth mentioning that “audiences” and “music lovers” are not exactly the same, in my opinion. Audiences are a much bigger group than music lovers. They are the people who come to concerts, but do not necessarily know much about classical music. They show a willingness to come though, and so they are the people we should be encouraging, since they could become music lovers. Sadly, the non-stop talk of the press and experts about concert rules and so-called manners could very well scare most of them off. 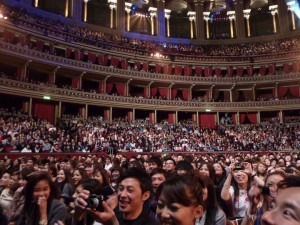 As little as 15 or even 10 years ago, we didn’t have as many halls and theatres as we do today, and we didn’t know what a “pre-concert talk” meant. People didn’t really know that they couldn’t enter and leave the hall freely, nor eat or drink during the concert. Most people intended to get free tickets, rather than pay for them. Even just five years ago, attending some of the concerts was just like visiting a temple fair.

But today we can see improvement and progress in our audiences. More and more concerts or performances are sold out quickly. Fans fly to Beijing, Shanghai or Guangzhou to attend the performances they are interested in. Audiences automatically switch off their mobile phones when they sit down in the concert hall.

I remember recently attending a dance performance. There were two intervals plus a short five-minute period when the curtains came down. This is normal for a dance performance, because dancers need to change costumes and set up the stage. However, behind the scenes, the presenters were worried sick because they felt that Chinese audiences were not used to so many intervals, and feared they would leave if they were not given a chance to stand. Plus, it was a contemporary dance performance. After long discussions, the dance company decided to make one of the intervals a kind of “artistic director’s talk”, to introduce the pieces. I have to say that it was a very good idea, and had good results.

However, the presenters’ nightmare still seemed inevitable. The five-minute interlude was apparently longer than planned. Everyone sat in the dark to wait. I could almost hear the heartbeat of the manager, who was sitting next to me. In that moment, one minute seemed ten times longer. And suddenly, a man’s loud voice: “What’s going on? Are you going to perform or not?” Nobody responded. And after a pause, the man shouted again: “Hey everybody, applaud. Ask for a refund.” And he began clapping. This time, I heard responses like “Shh!” and “Quiet!” from the audience. No one echoed his claps. When the man realised he was alone, his claps faded out. Soon after, the curtains rose again.

At that very moment, I said to the venue manager, “All the work behind the scenes was worth it. Our lovely audience just proved this.”

To my view, knowing how to behave at a concert or opera doesn’t necessarily imply that we were educated by westerners on what it means to be civilised. Throughout China’s long history, ordinary people demonstrated their enjoyment of stage performances like Chinese opera by cheering and applauding whenever they felt like it. People ate and drank as they enjoyed their shows, while westerners liked to make rules. And why not – after all, classical music originated in western culture. What I mean is that neither way of enjoying performances can be said to be superior to the other. Our opera singers need cheering and applause during the show, while classical musicians need a quiet environment to concentrate on their playing. It just comes down to the different nature of the performances, which come with different customs that need to be respected by people from different cultural backgrounds. And let me just say that the Chinese never get upset because westerners choose to watch our operas quietly.

I believe that what we need most is to find more ways to encourage audiences to visit concert halls more frequently, such as quality programmes and good marketing. To learn about a different culture is always a good thing. It can greatly enrich one’s life experiences and help us to gain an understanding and therefore respect for others who are not from the same cultural and historical background as us. At the end of the day, a performance can only be considered a success if the audiences enjoyed it and derived relaxation from it, instead of finding it constraining. Then, one might find our audiences far more civilised than one first imagined.