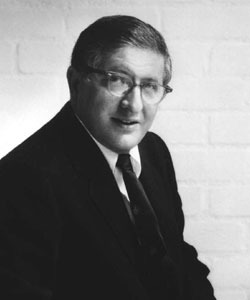 When we think of the composer Bernard Herrmann, we think of his film music and how it could carry a scene. Think about it: after you see Psycho, with those, literally, slashing strings, did you ever take a shower with your eyes closed again? His music for The Magnificent Seven, as he pointed out in an interview, moved faster than the horses, but we see/hear them moving at the speed of the music. Herrmann also wrote concert music and in that smaller genre, could express the quite intimate music he couldn’t put on the screen.

This 1967 work Souvenirs du voyage was inspired by three separate ideas: Houseman’s poem “On Wenlock Edge”, from the collection A Shropshire Lad; Synge’s play Riders to the Sea; and the Venetian watercolours of J.M.W. Turner. The sound is the clarinet and the performing forces are a clarinet quintet: clarinet plus string quartet. The clarinet is its own voice throughout, commenting or crying above the strings’ accompaniment.

This is not a happy piece – each movement has its own core of sadness. Houseman’s poem, with the full title of “On Wenlock Edge the wood’s in trouble,” speaks of the wood enduring from Roman times, threatened by those who would cut it down and by the gales that would destroy it. 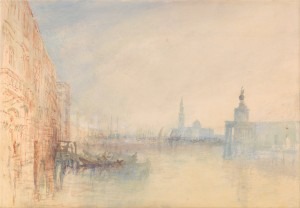 Turner: Venice: The Mouth of the Grand Canal

The second movement, a berceuse, seems to reflect the ebb and flow of the sea. In Synge’s play, a woman has lost five sons and their father to the sea, and now word comes of her sixth son’s death. The woman and her two daughters are left, hopeless and without comfort, for even their priest has just fallen and drowned. A berceuse is a lullaby – and this for a mother with nothing left in the world.

II. Berceuse: Andante
The last movement, with its Italianate feeling, carries us quite away from the unhappiness of England, and there, in the muted sunshine, falls in love.

III. Andantino: Canto amoroso
That certain tristesse that runs through this work makes it a wonderful vehicle for the highly expressive clarinet.