Guest Posts
In Touch with Ted Goldman at The Intimacy of Creativity
by Cathy Hung May 27th, 2011 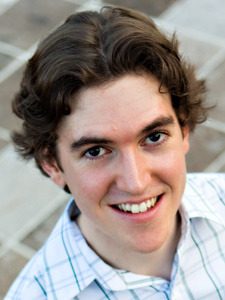 While some composers write their music based on concrete phenomenon, others prefer working on abstractness. In Scrudge, American composer Ted Goldman tries to balance between the two. Whilst agreeing a piece of music has an abstract self within, Ted draws his inspiration from patterns in nature. Whether it is ripples of water or leaves of a tree that reflects over one another, the composer finds them fascinating. “There is perhaps a sonic inspiration which is somewhat visual and mathematical, but for me it’s the interaction of patterns and the language they make,” continued the degree holder in Physics. Naturally drawn to patterns, the composer lists studying the game Go as one of his serious hobbies as one finds natural relationships within.


Grew up in New York, Ted compares the city’s energy and cultural opportunity to that of Hong Kong. To represent Ted’s background or lifestyle in Scrudge is perhaps least intended. Although he admits personal upbringing is inseparable to his composition, the composer would rather leave much space for imagination when asked to describe his music. “In general, I don’t describe my music. But I’d quote that if you’re able to describe music yourself, perhaps it isn’t necessary to write it.” Having left his own musical style a mystery, Ted is rather specific in naming one of his favourite pieces- Beethoven’s Piano Sonata Op. 10. Atop that, the composer also likes to listen to works by J.S. Bach and Radiohead.

Thus the question follows, what would contemporary composers expect in the audience who come to their concerts? Having no pre-conceived notions would be Ted’s answer. Despite everyone’s various backgrounds, coming to concerts with open-mindedness is very much appreciated. “I think a piece is like personality- a strong personality will be liked, hopefully much by some, or often not. I’d rather people who do like it like much than everybody to like a little,” explains the American composer with great certainty. To Ted, each of your opinions are equally valuable even though you might not be musically trained. Apart from all the freedom and support Ted gets from his family, he also benefited a lot from the non-musically-trained ears, “I wanted to pursue my career in composition but none of them are familiar with contemporary composition… It’s really their fresh ears that helped me through. They came without any preconceptions. I gained a lot from their pure and completely untempered opinion about how someone would have possibly written without any points of reference.” After all, music is written to serve all ears.

Generally composers give an impression of being late night workers, and Ted admits having been one of them in college. With the bliss of marriage, the composer shares about the change of his working habit, “Since I’m married a few years ago- my wife is a high school teacher who has an early schedule, I’ve started getting up and working early in the morning. It was a difficult transition but I enjoyed it. Just wake up, have breakfast and work on my music.” Indeed, life can be as simple as that.

The Intimacy of Creativity: Ted Goldman