Romanian soprano Elena Mosuc is one of the most in-demand sopranos of her generation. Closely linked with the Zürich Opera and a regular guest at the world’s great opera houses, she is a powerful exponent of the bel canto repertoire as well as Mozart’s coloratura roles. Highly decorated, in 2005 Mosuc was awarded the title ‘Officer of the Arts’ by the Romanian president, the highest honour which can be awarded to a musician in that country. I began by asking Mosuc about her early musical experiences.

Like many opera singers, Mosuc’s first musical experiences were in the family home. ‘I started to sing at home with my family at family meetings during Christmas or Easter’, she says, ‘and also in the church every Sunday and of course at school. So my voice was trained little by little all the time. I liked singing very much since my childhood; I loved making the people happy with my singing! I was not lucky like other colleagues who had professional musicians in the family but we loved singing all the time, even as amateurs.’ Mentored by soprano Mioara Cortez (sister of mezzo-soprano Viorica Cortez), who convinced her that she would one day become a famous soprano, Mosuc made her debut in Bucharest in 1992, and just three years later was a main artist at the Zürich Opera, where she now makes her home. 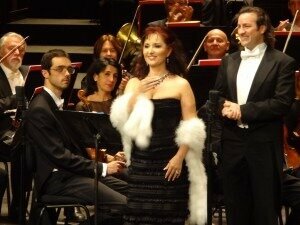 Mosuc is now in demand in opera houses across the world. But when asked her about her Romanian roots, she points out clear links to her origins and to her religious background. ‘The influence is especially clear in pianissimo, because in church I sang very much solo parts at important liturgical moments, and in these cases you cannot sing in an extroverted way; there are so many intimate moments which need much heart, pieta, humility. When I sing on stage I am always connected to God, and I really feel the vibration that is coming through me to the audience.’

Mosuc’s central repertoire is in roles such as Verdi’s Gilda in Rigoletto and Violetta in La Traviata, and she seems happy to keep mining the depths of the Italian opera tradition. ‘I have sung much of the bel canto repertoire, and I would like to keep singing it in the opera houses where I have already performed. I would also like to concentrate more on Donizetti’s Queens, Maria Stuarda, Anna Bolena, Elisabetta in Roberto Devereux and Lucrezia Borgia, roles featured on my new album Donizetti Heroines. Another role I have in mind is Leonora in Il Trovatore (I already sang the Leonara’s big scene in the last act and I felt it suited my voice well), and I would love to perform Bellini’s Norma more – I feel the role is perfect for my voice. Norma is a bel canto part par excellence, as the brightness and the purity of Bellini’s music fits well with the brilliancy of a coloratura voice like mine, with possibility in all voice registers including high and low.’ But Mosuc is not looking to abandon her core roles: ‘of course I can sing more Violettas, Gildas, Lucias, but I love and I need challenges and I don’t like routine. Even as I have sung Violetta or Gilda more than 100 times, I am always discovering new small things that have a big effect on my interpretation.’

That spirituality also appears in Mosuc’s activities outside music, as does her willingness to explore and take musical risks. ‘I love reading; the spirituality is very interesting for me. I also love travelling with my husband. I also like listening to other kind of music, not only opera; now I want to have another experience in my life and to try something different. I have a wonderful Portugese friend Gonçalo Salgueiro, a star of Fado music and musicals, and this year I will sing with him in Romania and also in Portugal, performing Fado music and highlights from The Phantom of the opera!’