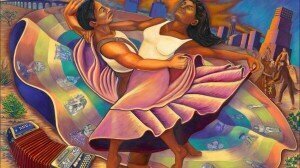 An old proverb states, “Traveling leaves you speechless, and then turns you into a storyteller. And that’s what happened to Aaron Copland after his first visit to Mexico City in 1932. His friend Carlos Chávez took him to a colorful nightclub called “El Salón México,” and Copland immediately “felt, in a very natural and unaffected way, a close contact with the Mexican people. It wasn’t the music I heard, but the spirit that I felt there, which attracted me.” 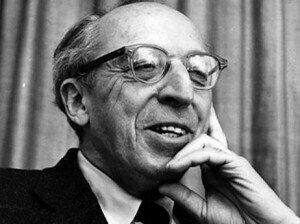 Copland had first learned of the existence of the club from a tourist guidebook, and “when I got there, I found a sign on the wall that said, Please don’t throw lighted cigarette butts on the floor so the ladies don’t burn their feet.” So he set his mind on composing a piece about that unusual dance hall, and purchased a stack of popular sheet music. “Using Mexican melodies seemed appropriate. My purpose was not merely to quote literally, but to heighten without in any way falsifying the natural simplicity of Mexican tunes.” 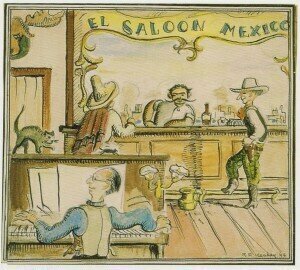 It nevertheless took Copland a good many years to assemble the composition resembling a picture postcard, as he felt unqualified as a foreigner to comment on Mexico’s history or revolutionary past. Copland was certainly uneasy about tampering with Mexican folk music. “I am terribly afraid of what you will say of the Salón México,” he remarked. “Perhaps it is not Mexican at all, and I would feel so foolish. But in America del Norte, it may sound Mexican.” The work premiered on 27 August with the Orquesta Sinfonica de Mexico at the Palacio de Bellas Artes in Mexico City. His friend and conductor Carlos Chávez was enthusiastic, “but I still felt nervous about what the Mexicans might think of a gringo meddling with their native melodies.” At the first rehearsals, “the orchestral players suddenly stopped when I entered and began to applaud vigorously. Never in my wildest dreams did I expect this kind of acceptance for the piece!”