Composers Anecdotes
I Want to Be in America
by Maureen Buja March 29th, 2014 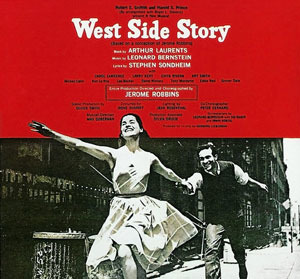 One of the most interesting songs about the United States comes in the voice of embattled immigrants, the Puerto Ricans who inhabit Leonard Bernstein’s 1957 musical West Side Story. The song ‘America,’ in the original Broadway production, contrasts an idealized vision of ‘home,’ i.e., Puerto Rico (a lovely island, tropical breezes, pineapples and flowers everywhere) with the reality of living in Manhattan (modern conveniences, automobiles, and the promise of the future). In the Broadway version of the musical, the song is sung by Anita, the strongest of the pro-American advocates, with and against her followers – girls who long for home but know that what they have in their new life is better, if more difficult.

It’s a song of contrasts:

Rosalia: I’ll drive a Buick through San Juan
Anita: if there’s a road you can drive on

Rosalia: I’ll give them new washing machine
Anita: what have they got there to keep clean?

These are all domestic concerns: looking good when you get home, the advancements you could bring back, contrasted with Anita’s cynical commentary on the reality of the scene.
When this was filmed in 1961, the song was altered: it was no longer a song sung by women, but sung by the women and their boyfriends and there’s a definite change in the tone. Now it’s the girls who are the advocates for the new country and the boys who long for the security and prestige they had at home. 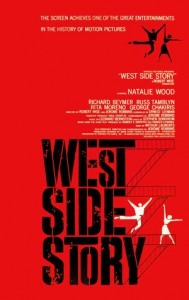 Anita: Buying on credit is so nice
Bernardo: One look at us and they charge twice

Anita: Lots of new housing with more space
Bernardo: Lots of doors slamming in our face

Girls: Life is all right in America
Boys: If you’re all white in America

For the first time we have discrimination, intolerance, racism, and other social problems becoming factors in this song – it’s no longer about flowers and showing off your prosperity. It’s an interesting contrast when you consider that most Hollywood musicals of toned what had been on the Broadway stage. In this case, there’s a heightened antagonism.

At the end of both songs, however, it’s Anita who has the last word, and you know that it’s her optimism that will carry the feeling:

Bernardo: I think I go back to San Juan
Anita: I know a boat you can get on