From having performed at the White House to Barack Obama, to appearing on the Today Show, having collaborated with artists including Chick Corea and Itzhak Perlman, Harlem Quartet’s CV is not to be sniffed at. The internationally-renowned ensemble was formed in 2006, comprising first-prize laureates from the Sphinx Competition, run by the Sphinx Organization, whose mission was (and still is) to address the underrepresentation of people of colour in classical music. 14 years later, Harlem Quartet have visited countries all over the world, and given countless education workshops alongside their incredibly busy concert schedule.

The quartet – comprising Ilmar Gavilán and Melissa White (violins), Jaime Amador (viola), and Felix Umansky (cello) – has been working for many years with the charity London Music Masters, an organisation which brings instrumental lessons and classical music to children in London’s inner-city primary schools. Alongside providing instrumental tuition, the programme also offers workshops on composition, and it is for one of these composition workshops that the Harlem Quartet is in town.

I speak to the quartet’s first violinist, Ilmar Gavilán, ahead of their session in Ashmole Primary School in London this month, about their projects with LMM and about their education work as a whole. 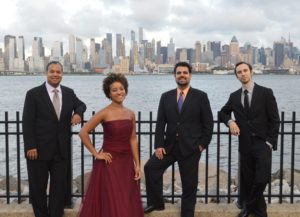 What do you aim to get out of composition workshops such as these?

‘It’s fun for [the children] and also for us. It’s all about creating the link between music and actual medium of expression. Very often when we think of music we think of something that you need years to learn how to write and read, but then after a workshop, the children have a sense that they are part of the creative process in a very tangible way.

‘If nothing else, we create a space where children feel validated, where their imagination actually has an outlet. You also create a potential concert-goer of the future, somebody that at the very least will appreciate the arts a lot differently, because they feel they had something in their childhood, that they did something.

‘We always talk about ‘broadening our audience base’, how the audience is ‘dying off’, but not too many people actually do something concrete about it. It’s not just about giving free tickets; it’s about creating interest. If you give me a free ticket to a rooster fight, I’m afraid I won’t go because it’s not my thing! We’re creating the sense of identification, and that actually is also a huge component for us, to be part of this. It’s just a way to start something. It’s the beginning of a relationship with the arts.’

What are the barriers to classical music exposure, as you see them?

‘In our case, in Harlem Quartet, when we started, we played in every school in Harlem, hence our name. We were shocked that it’s literally one stop on the subway from Harlem to Carnegie Hall, and [the children] don’t go. Very often there are some tickets being dropped off at some of the schools by some kind organisations, but the parents don’t think that’s a good use of their time. That’s when we realised that the demographics and socio-economic situation is only a part of it.

‘The real part is the cultural identification. It’s just to relate to the universal quality of music, not like the image that is portrayed – not only portrayed, but also validated by reality. Most orchestra members have a certain look, a certain age, a certain demeanour, and other people feel left out, but that’s why I think what we’re trying to do is very important. 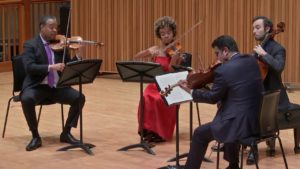 ‘I would love to see a general consent, a general acceptance that music is not a privilege: that it’s a formative tool that helps everyone. There is so much science backing up the benefits of early musical exposure, and practice. Neuroscience is proving so beautifully today how it affects maths skills, science skills, social skills… all sorts of wonderful things. I think developed societies look at sport as the answer to many things. Of course, sport is wonderful for many things, but without taking away any of that recognition, it doesn’t really cover the other benefits that practising music also provides.

‘I’m glad kids are playing recorders in most schools, but I would love to see all schools with a little orchestra, with all the instruments, and society just embracing that. That’s something that artificial intelligence will never provide, that kind of empathy and development, those qualities that go way beyond the ‘exclusiveness’ of what we call fine arts. It’s just benefits that are mundane and really useful in day-to-day life, and I think all kids should be exposed to that, and that society in general should embrace that concept, little by little.

‘I would also love to see more committed musicians, beautiful, wonderful performers, embrace their role as music ambassadors; not to think it’s up to the presenters, or the sponsors, or the big halls, to create the outlets, or to blame the politicians. Even if it’s just a grain of sand that you do – a letter, a comment… this is a shoutout to my colleagues in the field, to feel like this is part of their lives, to pass that on.’