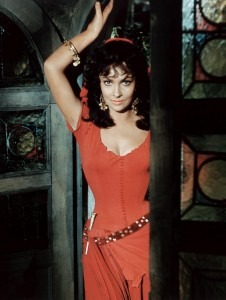 The actor Humphrey Bogart described her as “the girl that makes Marilyn Monroe look like Shirley Temple,” and the photographer Philippe Halsman unabashedly claimed “she had the finest figure among all the actresses I have known.” Dubbed “the most beautiful Woman in the Word,” Gina Lollobrigida embodied the prototype of Italian beauty. Her earthy looks and short “tossed salad” hairdo became a trademark, and during the 1950s she established herself as a universally acclaimed goddess. “Lollo” was born on 4 July 1927—which means she just celebrated her 90th birthday—in a picturesque mountain village in Subiaco. Daughter of a furniture manufacturer, she started modeling at an early age and successfully participated in several beauty contests. When her family moved to Rome, they all lived in a single room apartment. Gina wasn’t necessarily interested in becoming an actress. She studied sculpture at the Academy of Fine Arts in Rome, and took private voice lessons. Since she really couldn’t practice singing in the tiny room where her family lived, she would go into the Roman underground tunnel network and sing her heart out! But when she entered the 1947 competition for “Miss Italy,” and came in third, her career path changed significantly. As she told Parade magazine in April 2000, “I studied painting, singing and sculpting at school and became an actress by mistake.” 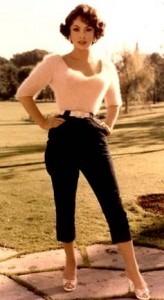 Initially, she appeared in a number of films in Italy, and following her appearance at “Miss Italy,” Howard Hughes flew her to Hollywood. At that time, Lollo was not comfortable and returned to Italy. Her actual Hollywood breakout movie “Beat the Devil,” directed by John Huston, came six years later in 1953. Her natural talents and beauty, her education, her training in art and singing made her a complete actress. So it was only natural that she would be called upon to play the part of “Lina Cavalieri” in the 1955 film “Beautiful but Dangerous”. It is the story of a music hall singer who falls in love with a Russian prince. Various jealous entanglements and even a murder later, Lina, now a famous opera star, arrives in St. Petersburg to sing in Tosca. As you might well imagine, there is much singing going on in this movie. Amazingly, Lollo was not dubbed but sang every single musical selection! Even Maria Callas once asked, “But was that really you?”