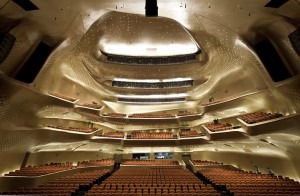 I’ve watched many performances of Madame Butterfly since my teens – in Paris, London, Verona –and I must confess that apart from the famous Un bel dì vedremo aria or the Humming Chorus, I get pretty bored if the performance lacks passion and authentic talent.

That being said, however, Anthony Minghella’s Butterfly at the ENO in London definitely ranked as one of my most exciting experiences at the opera. It changed my whole perception of the musical.

Minghella, together with Carolyn Choa, Michael Levine, Feng Han and their strong creative team, succeeded in turning Butterfly into an outstanding extravaganza by skilfully incorporating Japanese tradition and symbolism, and exploring the complexity of the characters through their costumes, gestures and expression. The production’s visual impact was so intense and the setting so stunning that any musical flaws or weak performances paled in comparison.

Since then, I have followed its production schedule around the world, wondering why such a marvel has yet to be brought to our region. To my delight, the Asian Première was finally launched by the Guangzhou Opera House this past September.

The GOH has been rated one of China’s top three theatres. Having attended operas and concerts at both the Shanghai Grand Theatre and the National Centre for the Performing Arts in Beijing, which were the other two contenders in the rankings, I must say that the Zaha Hadid designed GOH is definitely the most impressive in terms of architecture and acoustics, and therefore the perfect stage for the production. 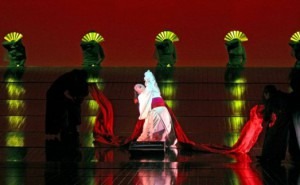 In collaboration with the Lithuanian National Opera and Ballet Theatre, the GOH brought a whole cast of established artists and musicians to Guangzhou for the Minghella production. In the title role, Chinese soprano Hui He was definitely the best Butterfly and probably one of the best sopranos I have ever heard. With a powerful voice mastered in art and expertise, her control was absolutely mesmerising, incorporating subtleties in tone, colour and shade that delivered delicate doses of joy, anger, doubt, sadness or despair as befitting the role.

Fabio Sartori as Pinkerton had a voice powerful enough to support He. Unfortunately, whether because of pollution or jetlag, Carlo Striuli as Sharpless failed to project, leaving all the notes stuck in his throat. And finally Lithuanian mezzo Laima Jonutytė, who played Suzuki, gave a rollercoaster performance. There were times when her voice was energetic and clear, but others when she too could hardly be heard, leaving one to puzzle over mumbling overpowered by the orchestra or other singers.

The evening’s audience was definitely the most enthusiastic I have ever encountered, clapping passionately, shouting and whistling. There was so little inhibition that it almost felt like a rock concert. Less acceptable were disturbances that took place during the performance. As a matter of respect for the performers and other patrons, audiences should learn to be on time. If latecomers miss the opening, they should be admitted only during appropriate breaks. However, people were arriving throughout the first 15 minutes of the performance, clacking their heels on the wooden floorboards and shouting greetings to their friends under the roving flashlights of the theatre staff. There were also a good number of ringing cell phones, even during the arias. Nowadays it is easy to bar cell phone signals, and late arrivals can be seated in a less disruptive manner. I believe these are easily amenable issues that GOH management might well consider.

When all was said and done however, the evening was most enjoyable, and the production as spellbinding as I remember. I hope the GOH will go on to host more of such international productions. With its gorgeous and easily accessible venue, it is the region’s most ideal destination for classical concerts and operas.