From a charming hero to a perfect dad

In any high school drama movie, there is always a scene like this: when a handsome boy walks pass, all the girls would turn their heads, look, and giggle. It happens in reality. I remember vividly how Freddy Kempf caught everyone’s eyes whenever he appeared at the Royal Academy of Music. Like another naturally charismatic pianist Van Cliburn, Freddy made his international career at the International Tchaikovsky Competition, though not by winning first prize in 1998. Since then, he has been performing in the world’s major concert halls, with great conductors and orchestras. In 2001, he was voted as the Best Young British Classical Performer in the Classical BRIT Awards and recently, he conducted from the keyboard to perform a complete cycle of Beethoven’s piano concertos. When it seems that the world is under his feet, Freddy Kempf tells you that a perfect day for him would be not being woken up by his kids, having a nice cup of coffee, and walking peacefully in the European Alps.

JL: In your concerts for Premiere Performances of Hong Kong, you have chosen works by Beethoven, Schumann and Mussorgsky. Is there any particular message behind this programme?

FK: There is no message so to speak – just that this is probably the first program in many, many years where I return to some of my favourite works of the piano repertoire. Up until now I’ve always played new works every season, which I’ve sometimes forced myself to, mostly to challenge myself each time. I’m therefore so happy now to return to some favourite pieces after such a long time. I just picked pieces that I feel closest to: I love the sentiment and tenderness of Beethoven’s Op. 109, and that it still is definitely Beethoven. Both Schumann pieces have been close to my heart for a long time – and I adore the Mussorgsky.

JL: You will also participate in the Play! series. Have you done any educational or outreach projects, tailored for kids before?

FK: I have done very much outreach work in the past – mostly in the US. I think from 1997 I spent almost 10 weeks a year for 5 years going around very interesting parts of the US – to some very underprivileged areas as well as some less safe ones. I think the most challenging event I did was somewhere in California, where the school had airport-style security and I was handed a microphone and walked out in front of 2000 13-16-year-olds – this when I was in my early 20s…! It’s a great feeling when you feel you’ve touched a child – let’s face it, classical music never was and never will have mass-appeal – it is a special art, yet it’s great to open a child’s eyes when they’re young, maybe when they still have a chance to make a career themselves.

JL: I remember that you have a family of your own. What are the ways that you would use to lead children into classical music?

FK: I think you can only show a child classical music/opera/ballet, help them understand how to enjoy it, and the rest is up to them. If they are used to the idea of going to a concert then they might ask to go themselves one day.

JL: Looking back at your own musical path, would you think that your early successes at the BBC Young Musician of the Year and the Tchaikovsky Competition were significant turning points?

FK: Yes – both events were turning points in their own ways. I was only 14 when the BBC Young Musician of the Year happened, and was still in high-school. This gave me so many opportunities: to study with Vladimir Ashkenazy, to perform so many standard repertoire pieces WITH professional orchestra, to learn how repertorie. It did force me to make a decision to focus everything on a musical career – but nothing I can regret.

Tchaikovsky was very different. I was (relatively) far older. I was finished with studies and simply trying to break into a career. The unexpected success from just a 3rd prize really started the career that I’m lucky enough to have today. 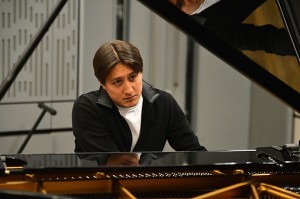 JL: Have you encountered any artistic struggles? How did you break through them?

FK: I guess I’ve been incredibly lucky with both my development and my teachers: I can’t really think of any ‘artistic struggles’…! I’m not saying I’ve been sitting on my thumbs my whole life and everything’s just fallen into place: I have put in a lot of hard work over the years, but somehow never felt discouraged. Sure there have been challenges; if I try to think of more recent times I suppose learning any new piece is a big challenge. I recently learned Prokofiev’s 4th Concerto, and this was one of the few pieces in my life where at points before the concert (i.e. months) I was really wondering whether I’d be able to learn the piece in time. However I simply stuck to my practice-plan and it worked out fine. Another massive step for me was leading my first rehearsal with a professional orchestra (as a conductor) EVER. I’d never done it before, and I was scared beyond belief. Yet I’d been taught what to do, so I simply trusted what I’d learnt and carried on.

JL: In recent years, you have directed from the keyboard to perform the complete Beethoven concertos. Would you consider following the steps of Ashkenazy or Pletnev, to become a conductor?

FK: Tough question. I think only time will answer that question. I say this because a few years ago, after the Beethoven concerti project had been announced I was also asked the same question: and I answered that I’d love to continue to direct but I would “never, ever consider conducting a symphony”. And somehow I’ve broken this vow as I’m contracted to conduct a number of symphonies in the coming season!!

If I want to tempt fate, then I guess my answer today would be that I hope that wherever conducting takes me, and I would only want to continue if I was very good at it, I hope that every concert I would be playing something even if there was a symphony in the 2nd half.

JL: Apart from performing and recording, what is your plan for the next phase in your artistic journey? Are you interested in creating multi-media projects, like Mikhail Rudy’s work on combining visual arts and music in Mussorgsky’s Pictures?

FK: I don’t really have any plans. I will just hopefully keep on going, learning new pieces (there are so many pieces we can learn in the piano repertoire!!), and improving. Every concert I keep cursing to myself the little things that I thought went wrong – and keep thinking that one day I’ll eventually get them right!

JL: Apart from music, what else is close to your heart?

FK: Close to my heart, I’d say just my family and friends. I really just want to be a good husband and father to my kids.

Less philosophically I guess I like to just have normal days – although I do love the working days too! Next to music I think comes sports. I’m not a great sportsman in any sense, but I do love to keep fit and do so by running and weight training – I’d rather skip a day of practice than a day of running! I also love languages – my life’s ambition is to speak 10 fluently before my brain gets too old to learn any more. I will certainly be working hard on my Cantonese when I’m in Hong Kong!

JL: What would be a perfect day for you?

FK: Right now? Well – NOT being woken up by either of my kids before at least 10am! Then for once to make a perfect coffee with my temperamental machine to enjoy with the rest of breakfast. And then anything – so long as the sun is shining. I live in the European Alps and love where I live – I wish I had more time to walk in the mountains than I do at the moment.