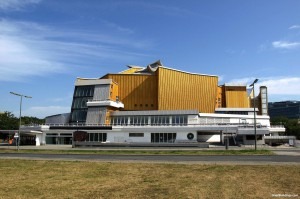 In a recent conversation on the 10th anniversary of the opening of the Walt Disney Concert Hall in Los Angeles, the architect Frank Gehry, the conductor and composer Esa-Pekka Salonen and the art critic Nicolai Ouroussoff discussed the concept of a perfectly conceived concert hall and the relationship between architecture and music.

Gehry indicated that his design of the Disney Concert Hall was very much inspired by Hans Scharoun’s (1883-1972) design of the Berlin Philharmonic Concert Hall, completed in 1963 in what was then West Berlin. Having attended many extraordinary concerts in that hall given by the equally extraordinary musicians of the ‘Berliner Philharmonie’, I have been struck by the hall’s perfect acoustics. Its unusual tent-like construction, with the public seated around the centrally situated orchestra, and its yellow color, elicited much criticism at the time, but it now serves as a model for many concert halls around the world, and for the Walt Disney Hall in particular. 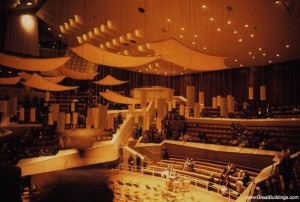 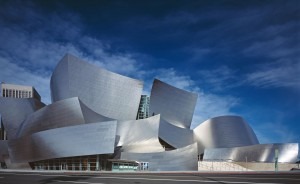 With the design of the Disney Concert Hall, Frank Gehry carried the concept of space one step further. Just as the close interaction of audience, conductor and musicians creates a more personal experience, he also saw his concert hall responding to the city streets and the public spaces surrounding it. Various entrances can be opened to the street to create openings, bridging inside and outside, which is also replicated in the close relationship between the street and the Concert Hall’s garden — freedom and control are both always present. 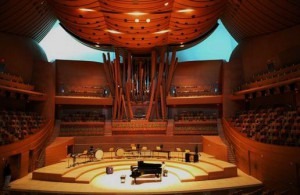 Gehry’s architecture, with its powerful narrative and expression, is like music itself. Interestingly, as a young architect, Gehry talked about his love for the music of Johann Sebastian Bach. Bach’s fugal structures, such as the ‘Toccata and Fugue in D-minor’, BWV 565, with its definite rules in the beginning, leading later to greater freedom, creating a musical texture, are excellent examples of architectural expression in music. Gehry’s early buildings were inspired by the International Style of Le Corbusier and the Bauhaus — architecture which exposes the elements of its very construction with the essential components of these buildings becoming visible. 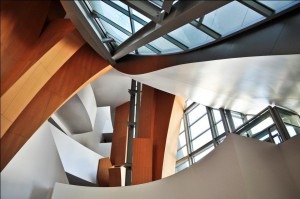 Section of the Entrance Hall

In his own house, Gehry had stripped the interior walls to reveal the structural elements. However, when Gehry’s Guggenheim Museum in Bilbao, Spain, opened its doors in 1998 (which I visited in the fall of that year and was awed by its extraordinary architecture and the opening exhibition of the best of the Guggenheim collections), Gehry had moved in a very different direction, not only as one of the most important, but also one of the most visionary and imaginative architects of our time. The Guggenheim’s massive, titanium-clad structure on the Nervión River resembles a moving fish, revealing different angles and forms as the visitor moves around the building, with constant visual surprises waiting at every turn — deconstructing the fish form. In the above-mentioned interview Gehry spoke about his interest in music, which over the years, had started to shift, in that he became increasingly interested in the works of the composer and conductor, Pierre Boulez. 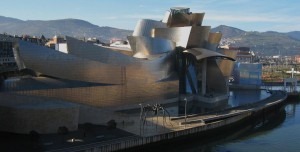 Pierre Boulez, one of the most influential composers and conductors of our time, and a student of Olivier Messiaen, had started as a follower of Schoenberg, Berg and Webern, moving from twelve-tone compositions to serialism, which gave him a strict discipline, and subsequently to structuralism and post-structuralism. Boulez’ early compositions were based on the poetry of Stéphane Mallarmé (Un Coup De Dés N’Abolira Jamais Le Hasard/A Throw of the Dice Never Abolishes Chance’ which became Pli Selon Pli/Fold by Fold), René Char and Henri Michaux. He was a close friend of the leading writers and intellectuals of his time, such as Michel Foucault, Jean Genet, Theodor Adorno and Roland Barthes. His composition Sur Incises took an earlier piece, Incises, written as a test piece for a piano competition, extending it to three strategically placed pianos, three harps and three sets of percussion instruments. The theoretic development starts with what he calls “un gifle musical” (a musical slap) with all of the instruments starting with the same set of notes, but are later given great extension and expansion to end with a sort of resonance taken up by all of the instruments, creating and utilizing space, in which everything floats. Sur Incises ends with the conductor lowering his hands (non-dirigée/not conducting), notes continuing on the various instruments slowly fading into space until silence takes over – so reminiscent of Gehry’s floating architectural forms — music and architecture remaining flexible, eliciting experiences which are not pre-determined.