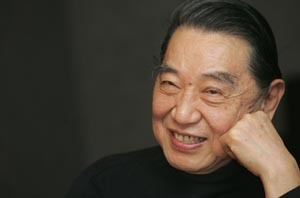 China’s Legendary Cold-War Era Pianist gave a show to a packed house in Taipei last weekend, cementing his status as an elder statesman of China’s classical music universe, and of the piano, full stop. He is one of the few surviving links to China’s pre-1949 musical past: raised in a Shanghainese Europhile family, he studied with Mario Paci, the Italian maestro credited with establishing a classical music framework for foreigners and Chinese alike in pre-war Shanghai.

Fou is best-known for his association with Chopin; a win at the 1953 Chopin Competition first put him on the map, and he lived in Warsaw before moving to the UK and forsaking his PRC citizenship. But for last weekend’s concert in Taipei’s National Concert Hall, he eschewed the usual crowd-pleasing mazurkas for other works he has championed. In his long career.

The program opened with Debussy’s Berceuse Heroique, a dark, brooding piece stemming from the composer’s WWI-era depression. It is fair to ask whether, at the advanced age of 78, Fou’s touch is as sure as it once was. The answer: while he is undoubtedly advanced in age, he remains in impressive command of a wide range of colors, and managed an impressive two-hour show of stamina. For the Debussy’s darker sections, he was perhaps a little bit too in-control, losing sight of the gray mistiness that the music is meant to evoke.

Domenico Scarlatti, the lesser-known son of his famous baroque father, was a better fit for Fou’s current disposition. Though still technically baroque, the younger Scarlatti’s has a harmonic looseness that sounds decidedly progressive. In Fou’s hands, the sonatas sung and swung through surprisingly elastic harmonic and rhythmic twists.

Beethoven’s Piano Sonata No. 15 also sprung to life in Fou’s hands. While this sonata is less musically adventurous compared to other works be Beethoven in this period, Fou kept it loose and alive – Pastoral lived up to its name.

While Fou kept a sure-handed command of the music throughout, sometimes he was overconfident – Liszt’s Sonetto 123 del Petrarca started with a firm, conviction-laden error in the chord. As with the Debussy, some of the dreamy qualities did not entirely come through.

The evening’s definite highlight was a tour de force of Schubert: the Hungarian Melody in B minor, Adagio in G major, and Drei Klavierstuecke, played with any pauses for applause through to a triumphant finish. Fou’s balance of conviction and elasticity suited the material perfectly, his touch was never shaky, and his audience rewarded him with rapturous applause. The master still has his touch, and his fans.