As we come into summertime, we want music that matches our positive outlook. Composers, however, may take a different look at the heat and weather conditions. They give us storms, sleepy naps in the sun, and even work to do! We have to start, of course, with The Seasons. It can be the Four Seasons of Vivaldi, Tchaikovsky’s piano cycle The Seasons, Glazunov’s ballet The Seasons, or even Handel’s oratorio, The Seasons. We have seasons everywhere, but most importantly, we have the summer.

In 1875-1876, Tchaikovsky had a commission from Nikolay Bernard, editor of the periodical Nouvelliste to write a piano piece each month for publication in the journal. The pieces were intended for amateurs, but still contain the occasional technical challenge. In July, the Song of the Reaper not only conveys the rhythmic gestures of the task but also carries an idea of the progress of the job.

Tchaikovsky: Les Saisons (The Seasons), Op. 37b: VII. July, Song of the Reaper (Ilona Prunyi, piano)
Glazunov’s ballet The Seasons made its first appearance at the Mariinsky Theatre in February 1900. The section on Summer is set in a cornfield, where we first have a dance of cornflowers and poppies with the Spirit of the Corn. In following tableaux, mythical Naiaids bring water, and then Satyrs and Fauns try to carry off the Spirit of the Corn before a wild Bacchic dance introduces Autumn. 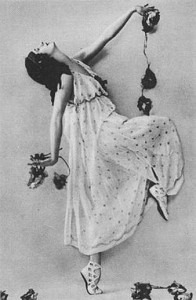 Anna Pavlova as a bacchante in Autumn. St. Petersburg, 1907.

Glazunov: The Seasons: Summer: Waltz of the Cornflowers and the Poppies (Slovak Radio Symphony Orchestra; Ondrej Lenard, Conductor)
Where we generally think of Haydn’s oratorios as being on sacred topics, his oratorio The Seasons is a pleasant change from all the angst of the Biblical story works. It was written as a companion piece to his other oratorio, The Creation, and is considered to be one of his finest oratorios. We like it because of all the very human acts it captures in music (hunting, drinking, etc.), and how it captures the sounds of the seasons (the weather, the animals and so on). Here, we have a summer storm:

Vivaldi: The 4 Seasons: Violin Concerto in G Minor, Op. 8, No. 2, RV 315, “L’estate” (Summer): II. Adagio – Presto (Joshua Bell, violin; Academy of St. Martin in the Fields Orchestra)
We’ll close with one of the greatest pieces about summer. Gershwin’s opera Porgy and Bess, opens with sound and fury before Bess comes and relaxes it all with ‘Summertime.’

Gershwin: Porgy and Bess: Act I Scene 1: Summertime (Diana Damrau, soprano; Royal Liverpool Philharmonic Orchestra; David Charles Abell, Conductor)
So, as Bess says, let’s rise up singing and greet the summer – no matter if it brings a storm, some work that must be done in the sun, or even a little nap.