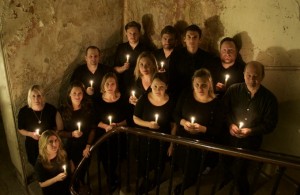 How do you get a record of new choral music made? In these days of austerity and penny-pinching, you need to be innovative. At the same time, in these days of social media and the power of networking, new avenues are opening.

The London-based choral group Lumen wanted to record an album of music, but focusing the content on music by young composers, the ‘emerging’ composers who have such a difficult time in getting their music into the wider world. The first problem was to find the music. Some of the composers were already singing in the choir, others were friends from university, and yet others responded to queries sent out on social media. Thus we have the true album of the 21st century, built on networking and social media.

The funding for the album is being raised via Kickstarter.

The fundraising started on Friday and 4 days later, they were over 40% to their goal. Funding has come, literally, from all over the world: China to Brazil, Russia to Australia, and, of course, from the US and the UK.

Once funding is secured (and they only have a 30-day window), the group will make their recording in May 2018, followed by a private concert for funders only in London. For a higher pledge, funders will receive not only 2 concert tickets and 2 CDs but also have access to ‘behind the scenes’ updates over the course of the rehearsal and recording session.

This has been something of interest in this fundraiser – Benjamin Thiele-Long, director of the choir, has noted that his audience really doesn’t want to be performed at, but wants to understand the process by which the performance takes place.

The choir is proudly an amateur choir – everyone has the proverbial day job and it’s not as a choir singer. However, many have cathedral backgrounds and have used the choir to extend their choral training beyond their school days. The choir has had a long-running relationship with the church of St John on Bethnal Green where they rehearse and perform. The church donates rehearsal and concert space to the choir (their concerts are free) and, in return, passes the basket and sells refreshments to the concert-goers. Venturing outside London, the choir will be performing at Windsor Castle late this year, for Evensong at St. George’s.

Thiele-Long credits composers and choir directors such as Eric Whitacre, Will Todd, and Paul Mealor for bringing choir music back to the mainstream. With their Kickstarter campaign, Lumen is able to find a new international audience for their music and by devoting an album entirely to premieres, is giving us the chance to benefit through new music. You only have until Saturday, 21 October, to support this group’s fundraising process, so don’t delay.