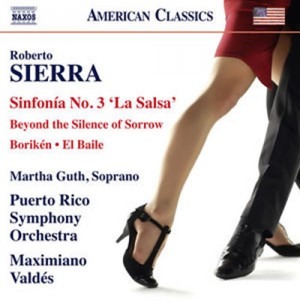 The sonic colour and distinctive rhythms enshrined in these four works provide further evidence of the art of internationally acclaimed Puerto Rican composer, Roberto Sierra. The award-winning Sinfonía No. 3 ‘La Salsa’ owes its inspiration to the music of the Spanish Caribbean and is a salsa of older and newer rhythms, intoxicatingly presented amidst revelry and dance. The instrumentally vivid Borikén is based on the baroque chaconne but with a Latin twist, while El Baile invokes traditional music in a wholly distinctive way. Beyond the Silence of Sorrow is a captivatingly lyrical song cycle.