Features
How You Should Feel in the Key of D minor
by Maureen Buja March 25th, 2016 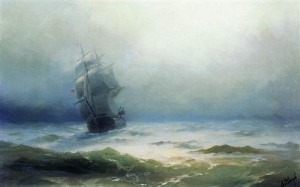 In our earlier series on C major and minor and G major and minor, we listed Ernst Pauer’s suggestions from 1876 of pieces that fit the particular affect he assigned for a key. For the rest of the major and minor keys, he left us the attributes but not list of pieces.

Pauer’s key characteristics for D minor are that it: “expresses a subdued feeling of melancholy, grief, anxiety, and solemnity.”

What pieces do you think should be added here? Keep in mind that the piece should date from before 1876, when Pauer’s book was published. Another guideline might be to note the relatively small list of composers he gave as examples: Haydn, Mozart, Beethoven, Mendelssohn, Schubert Rossini, Weber, and Spohr – all stalwarts of German classicism / romanticism.

The feelings of melancholy and grief are ones that we avoid nowadays, even to the point of developing whole ranges of pharmaceuticals to deal with those emotions. In the 19th century, however, they were part of the range of human experiences that you had to endure and get through. Death was common, particularly at a young age. It is estimated that in 19th-century Germany, one out of every two children born, died. So, much appropriate to grief wouldn’t be out of place.

I’ll make a couple of suggestions and the reasons and see what you might add to these:

Beethoven: Piano Sonata No. 17 in D Minor, Op. 31, No. 2, “Tempest”: I. Largo – Allegro (Louis Lortie, piano)
This piano sonata, named after Beethoven’s death for Shakespeare’s play The Tempest, has a sense of anxiety in its first movement, pushed by the alternate fast and slow sections, the repeated figures, and the many changes in texture. It’s not settled, but unsettling.

Here’s one that I think DOESN’T work:

Mozart: Missa brevis in D minor r, K. 65: I. Kyrie (Cologne Chamber Choir; Collegium Cartusianum; Peter Neumann, cond.)
This very early mass, even though in D minor, doesn’t really yet have the solemnity one might expect. It was only the 2nd mass that Mozart had written and he’s still struggling with the voice setting and getting it to be interesting. It was written in 1769, when Mozart was only 13.

What would you suggest?