Blog
From the Eye to the Ear: Shape Note Singing
by Maureen Buja May 11th, 2015 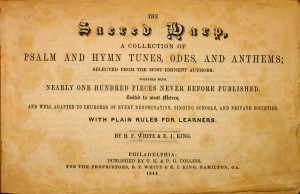 How can you sing when your notes aren’t round? How do you interpret a diamond-shaped note or a triangle? This isn’t avant-garde notation, but one that dates back a couple of centuries and is still alive today. This particular hymn-singing tradition in the US comes from the southern states and is named after one of the early collections of these hymns, The Sacred Harp.

Music in The Sacred Harp hymnal as a couple of interesting characteristics: the melody is in the tenor voice and the notation is not the usual round note heads we may be familiar with.

This music is written in what are called ‘shape notes,’ where the different shapes of the note heads, square, round, triangular and diamond, indicate different pitches. This makes it possible to read the music two ways. If you can read music, then you just read the notes. If you can’t read music, then you read the shapes. It was tied to the solfège syllables (fa-sol-la-mi) and requires a singer to link the note of the scale, the shape, and a solfège syllable. This was made easier by the fact that the usual first reading of a hymn was without the words but with the solfège syllables.

You’ll see here that ‘mi,’ the diamond-head note, is only used for the note ‘B,’ which is the leading tone, the half-step below the net note, ‘C.’ The relationship between the other notes is all whole steps. This scale is in the key of C – but for shape note singers, the key was irrelevant – they could transpose to whatever key would be comfortable for their voice and still use the same solfège syllables.

Although this may seem confusing to us who are tied to visual reading of the score, a study in the 1950s found that untrained singers could learn how to sight-read more quickly and with greater accuracy than those who did not use the shape-note system. 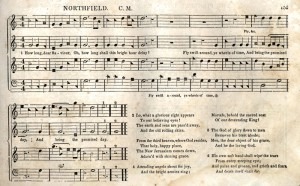 Ingalls: Northfield (Word of Mouth Chorus; Larry Gordon, Conductor)
In this recording of the hymn ‘Northfield,’ we hear a couple of characteristics of the music: a nasal sound to the voices (common in untrained voices) that remains part of the performing tradition, and a very rhythmic performing style. In the music, the annotation C.M. at the top means that this text is in Common Meter: 4 lines that alternate between iambic tetrameter (8 stresses per line, alternating unstressed – stressed) and iambic trimester (6 stresses per line, alternating unstressed – stressed). This can also be marked as 8.6.8.6. or 86.86. What this means is that any other poem in Common Meter can be used for any piece of music written for a C.M. text. For ‘Northfield,’ for example, you could substitute another CM poem, such as ‘Amazing Grace.’ Other meters are LM (Long Meter (8.8.8.8)) and SM (Short Meter (6.6.8.6). Poems in other meters will indicate them with numbers (10.10.10.10 or 6.6.11.11.).

One problem, of course, with the four-note system is that modulation, changing key, is impossible and as a consequence, modulation is avoided in the Sacred Harp repertoire.

Music printed in shape notes continues to be produced, primarily for religious music in the American South. It’s an interesting throw back to 19th century (or earlier) music performance by amateurs in religious setting, who, with just a little training in sight-reading conventions, could have an entire repertoire at their disposal.