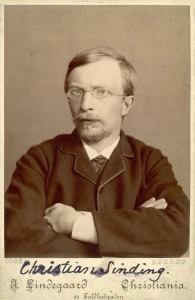 Ambitious amateur pianists primarily remember the Norwegian composer Christian August Sinding (1856-1941) for his Frühlingsrauschen (Rustle of Spring) Op. 32, No. 3. However, during his lifetime he was not only considered the musical heir to his compatriot Edvard Grieg, but also Norway’s most famous composer. His music was performed all over Europe, and he was even appointed a member of the “Academy of Arts” in Berlin in 1909. In that year, only two candidates were accepted, namely Sinding and Puccini. Although Sinding composed four symphonies, three concertos, a large number of chamber and concert works, his name is permanently linked with the third piano piece from his Op. 32 set. Frühlingsrauschen was written in 1896 and subsequently published by a large number of publishing houses in Europe and the USA. Sadly, with copyright laws still in its infancy, Sinding got virtually no compensation related to performances and the sales of his music.

Christian Sinding: 6 Stücke, Op. 32 “Frühlingsrauschen”
Sinding was born in Kongsberg, but after his father’s death, the family moved to Kristiania, aka Oslo. Regular schooling was not to his taste, and he eventually moved to Leipzig and became a student at the famed conservatory. A capable violinist, it soon became clear that he had a major talent for composition. Regular grants from the Norwegian government allowed Sinding to further his studies in Munich, and he made his musical breakthrough with his Piano Quintet Op. 5. First performed in Leipzig by the legendary Brodsky quartet, it also featured Ferruccio Busoni at the piano. A local critic wrote, “The work demonstrates in all of its four movements a simply astounding talent for invention and combination as well as a wonderful sense of sound effect. At the same time, the ideas are so masterfully disposed and such a splendid opposition of themes is in evidence throughout, that one cannot cease to voice one’s admiration for this very important musical talent that expresses itself, daring and individual everywhere.”

Christian Sinding: Piano Quintet in E minor, Op. 5
The quintet was championed by Tchaikovsky and Sibelius, and received 30 performances in 19 cities on 2 continents over the next three years. It certainly established Sinding’s short-lived claim to fame. He was recognized as the “greatest national composer since Grieg,” and appointed at the Eastman School of Music in Rochester, New York, for the 1920-1921 academic year. Since Sinding consistently composed in a late-romantic style, he was mercilessly and heavily criticized for not expanding his musical expression. Critics wrote, “We have seldom countered anything more monstrous before, anything that more defies musical logic and causality or indeed plain common sense and good taste. Sinding readily absorbs outside influences without distinguishing between that which is worth of imitation and that which is not.” True enough, Singing’s tuneful and attractive musical style consistently relied on the models of Schumann, Liszt, Strauss and Wagner.

During the final decades of his life, Sinding engaged with larger forms and composed four symphonies. His third essay in the symphonic genre seemingly takes its musical bearing from Wagner’s Meistersinger, and features a luxurious slow movement. Sinding also wrote about 250 songs, and he is considered one of the greatest Scandinavian creators of art songs. Despite these critical accolades and an extensive musical catalogue, Sinding’s music has almost completely disappeared from the concert stage. The reason, as we might well suspect, has nothing to do with the quality of his music. Rather, Sinding supposedly joined the Norwegian Nazi party a couple of weeks before his death. Recent research has shown, however, that the application to join the NS was never signed by Sinding himself, and that he was “registered as a member involuntarily.” His reputation, however, has never recovered.