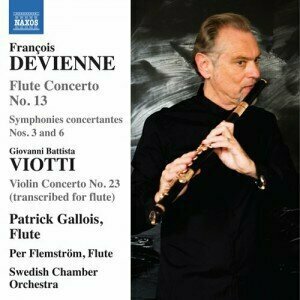 François Devienne’s series of wind compositions was pivotal in making his name synonymous with that of the flute. This final volume in the series includes Concerto No. 13, which ranks alongside his finest concertos with its profuse thematic ideas and sophisticated orchestral writing. As a leading virtuoso in Paris, Devienne was perfectly placed to write Symphonies concertantes, glittering showcases that remain among the best of their kind. Giovanni Battista Viotti’s arrangement of one of his best-known Violin Concertos makes an ideal companion piece to the other works on this recording.