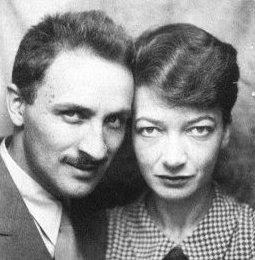 The 2005-film Brokeback Mountain—an adaptation of the 1997 short story by Annie Proulx, which featured two married cowboys in love with each other—brought the issue of mixed-orientation marriages to public attention. However, this type of marriage between partners of differing sexual orientations is hardly a phenomenon of the 21st century, as a number of famous celebrities throughout the ages have entered into these unions for either career advancements or social acceptance. Take the composer Marc Blitzstein, for example. Blitzstein was openly gay, and had his first known sexual relationship with the conductor Alexander Samllens at age 19. Yet he also was in an eight-year relationship with Eva Goldbeck, the woman he eventually married.

In a letter dated 29 August 1929, Blitzstein describes his attempts of coming to terms with his sexual orientation to his sister Jo. “I lacked courage to express the emotional—sexual aux Fond—thing. I think you guess, you know, what all this is about. It has become imperative at last that I cut out the balance and the control, and let out what has been secret and furtive in me for so long. Shame is the largest single enemy; the sense of being sick, of living a diseased life, the social obstacle…I have reasoned it out in my mind; until now what has gone on has been in instinctive process of self-protection, with my mind playing handmaiden to my cowardice…Now, I accept what I am. My sin is, has been, vanity of this special sort; the willingness to corrupt my nature.” Speculating on the origins of his sexuality, he suggested that “I should be medically classed a bisexual, since I have had sexual experiences with women, and liked it.”
Blitzstein met Eva Goldbeck in the summer of 1928 at the MacDowell Colony, a dedicated farm in New Hampshire where artists work in the company of their peers. When she first saw him, she quipped, “Who’s this fairy coming,” although his sexual orientation eluded her for some time. Marc and Eva became friends, and he dedicated a number of works, including his String Quartet, to her. Goldbeck was born in Berlin, daughter of the writer Edward Goldbeck and singer Lina Abarbanell, who had performed in a number of operetta roles in European houses. The family relocated to America and settled in Evanston before moving to New York. Daughter Eva was a petite woman, about five feet three inches in height, with green eyes and brown hair. She adored her father, but in the words of her psychiatrist, “loathed and despised her mother.” In early 1922, she married her second cousin Cecil Goldbeck in order to obtain American citizenship. The marriage failed on grounds of adultery in early 1924, but the two remained best of friends.
Goldbeck earned her living by reporting on French and German reviews of European pictures for Metro-Goldwyn-Mayer, a company she worked for after relocating to Europe in early 1929. Marc eventually informed Eva that he was homosexual, which left her “dumbfounded, and almost chagrined that I hadn’t—I should have trusted my instinct instead of all other indications.” He wrote her glowing love letters, “The thought of you, our life, has done absolutely incredible things to me. I am boundlessly happy and I think you love me and need me, and I love you and need you and that the difference is one of degrees, not kind.” Privately, however, Blitzstein described the relationship as “a union conditioned by her hero-worship of me, and my reluctant acceptance of it.” Yet, eventually they agreed that they would enter into a “permanent relation,” meaning marriage.
Marc and Eva performed the “social gesture” of marriage on 2 March 1933. They enjoyed some physical intimacy, and they definitely had sex—what Eva called “moonlight.” Blitzstein’s homosexuality, the “sex business,” as Goldbeck referred to it, nevertheless had a disturbing element of pretense. It was also becoming clear to her that Marc had not married her for desired companionship, but because it served his artistic ambitions. “Now that I know for sure I have you, that we belong,” he wrote to Goldbeck, “I can pursue practical goals with keenness and no concern.” Eva had always been frail and struggling with breast cancer. Sexually, artistically and intellectually frustrated, she starved herself to death at age of 34.
Following Eva’s death in 1936, Blitzstein apparently engaged in a good deal of casual gay sex. Yet, he also had two long-term homosexual relationships. Bill Hewitt was a bisexual Southerner whom he met in 1944 while stationed in England, and Adolfo Velletri entered his life in Rome in 1961. Always attracted to masculine working-class men, Blitzstein preferred to cruise the rough trade, which according to his nephew “led to incidents of theft, abuse, and violence.” It also led to his murder in Martinique in1964, as three sailors he had picked up in a bar—one of whom, he was said to have propositioned—beat him to death.
Marc Blitzstein: String Quartet (Italian)