Bach… on the Bass? DaXun Zhang playing what he wants to play 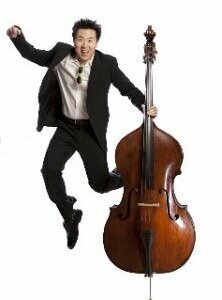 Making an appearance at the Hong Kong Chamber Music Festival is bassist DaXun Zhang. After completing his studies at Beijing’s Central Conservatory of Music, he moved to America, where he now teaches at the university of Texas. During his time in America DaXun received a highly prestigious Avery Fisher Career Grant, a testament to his skill on an instrument often seen more as an accompanimental, rather than soloistic, voice.

In Austen, Texas, balancing performing and teaching is incredibly important to DaXun; he tries never to travel away for more than two weeks at a time for his students’ sakes. He also speaks of teaching as a two-way experience, never something unidirectional:

‘Teaching really helps me. I started the bass when I was really young. Things came very naturally to me. There were eight bass players in my family; the bass chose me!

‘Fortunately, I never had to struggle, but when I started teaching I realised not everybody had that experience, so I had to analyse what I did, and what I do. It makes me discover new things about my own technique, makes me think more.’

As an instrument, the bass suffers an identity crisis at times. As well as its traditional role of underpinning the ensemble, in the right hands the bass can be a vehicle of technical virtuosity. In his earlier days, DaXun felt the need to prove this not only to others, but to himself.

‘In my younger years, there was a period of time when I wanted to prove myself, to prove that being a bass virtuoso could be done. But now I don’t want to think that making music is because you have to prove you can do it. I don’t play ridiculously difficult things that don’t sound good on the bass. If I arrange something, I want to make that piece sound as good on the bass as the instrument it was originally written for.’

It seems he has achieved this with his album of Bach Cello Suites released in 2013, receiving widespread critical acclaim. ‘I play Bach for totally different reasons now than I did ten years ago’, he explains, reiterating his desire to play music that he wants to play, not what he thinks he should play.

DaXun originally started as a cellist before moving to the bass – so his recent performances with the Silk Road ensemble and Yo-Yo Ma were something of a special experience. ‘As a cellist, Yo-Yo Ma was my idol, so getting to play with him was a dream come true,’ he recounts.

Not only this, but playing with Silk Road opened DaXun’s eyes to the music of his homeland. 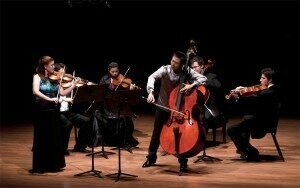 ‘It really opened my mind, helped me to think outside the box. After playing with Silk Road I started playing Chinese instruments, and got more interested in Chinese traditional music. Being Chinese, I always played Western music, but after Silk Road I realised there’s a lot of music in China worth playing and sharing with the West!

Not only does he try to share the music of his native China with others, but is embarking on a project to provide an edition of major bass repertoire, complete with his own fingerings and bowings.

Originally born out of a desire to save time in students’ lessons, the DaXun edition aims to provide fully marked-up parts, designed to nip bad habits in the bud.

‘There is no right or wrong with fingerings. What works for me may be different for other people, but for high school students, I believe there needs to be more information on the music.

‘My edition contains many more fingerings than other editions, but I think at a young age it’s good to start building good habits. When high school students come to play to me I see bad habits that will effect them in the future.’

In addition to a Bach Suite and Koussevitzky concerto already being available on his website, there are plans to share his own arrangements of pieces such as Zigeunerweisen and the Carmen Fantasy. Something to keep his students busy while he’s away…

DaXun Zhang will be performing at the HKICMF in January 2015

Prelude from Bach Cello Suite No. 5