If you are planning to welcome 2015 in France, Belgium, Brazil, Portugal or the province of Quebec in Canada, chances are that you will be part of an extended dinner party called “réveillon.” Exceptionally luxurious, appetizers often include truffles, oysters, escargots, lobster or foie gras, followed by a traditional turkey with chestnuts filling. The dessert selection is even more sumptuous, and includes the traditional “bûche de Noël” (Yule log) coated with chocolate and filled with raspberry jam. In some areas, the ritual of the 13 desserts—supposedly representing Jesus Christ and the 12 apostles—is readily observed. The first four are known as the “four beggars” and represent the four mendicant monastic orders; Raisins (Dominicans), Walnuts (Augustines), Dried figs (Franciscans), and Almonds (Carmelites). This is followed by a variety of fresh fruits and a number of delectable sweets, like my favorite the “Calissons d’Aix” a candy made from marzipan and candied melon. And did I mention that réveillon is always accompanied by premium wines and free-flowing champagne?

Since this grand feast only happens once a year, many people travel thousands of miles to be part of the festivities. How far would you go in order not to miss it? And that was exactly the question asked by the French dramatists and opera librettists Henri Meilhac and Ludovic Halévy. (You may have come across their names before, as they famously collaborated on the libretto for Georges Bizet’s Carmen. And let’s not forget that there are more than a dozen collaborations that are linked to the music of Jacques Offenbach, Jules Massenet and Hervé.) And thus, Meilhac and Halévy published a humorous tale of intrigue, love and theatrical disguises entitled Le réveillon. It tells the story of a minor royal sentenced to eight days in prison for insulting a government official. Yet he desperately searches for a way to postpone jail for one day in order to enjoy the réveillon dinner. As you might well imagine, things get out off hand rather quickly! The comic potential of this play was quickly realized in German-speaking lands as well, and Karl Haffner produced a translated theatrical play for Vienna, which caught the eye of Johann Strauss. 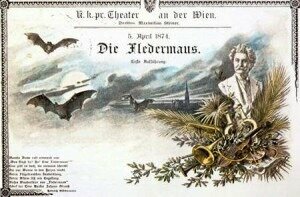 Johann Strauss was eager to have the theatrical play adapted as a libretto for an operetta, but the French custom of réveillon caused a bit of a problem. So Richard Genée, a Prussian-born Austrian librettist, playwright and composer, quickly replaced the réveillon with a Viennese ball. And the final result was Die Fledermaus (The Bat), which premiered on 5 April 1874 at the Theater an der Wien in Vienna. One of the most important Viennese theaters, its director Max Steiner had quickly realized that he could make a lot of money producing stage works set to music by Vienna’s most popular composer. According to popular legend, Strauss composed for 43 days on end, neglecting food and sleep until the work was finished. It is of course more likely that Strauss outlined the project within a six-week period, as it actually took almost six months before the work was ready for the stage. Since a traveling opera company was subsequently booked for the Theater an der Wien, Die Fledermaus closed after only 16 performances. Soon thereafter, it was produced in Berlin, and within the same year it was brought back to Vienna for a much-heralded revival. Since then it has never left the active repertory. And whether you are enjoying réveillon or dancing at a Viennese ball, just make sure you don’t end up in prison! Happy 2015!