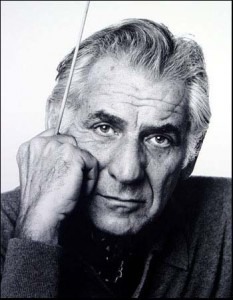 If we look at Leonard Bernstein (1918-1990) we see a musician who came to embody the best of classical music. He was a conductor, most famously making his debut in 1943 with the New York Philharmonic Orchestra on a moment’s notice and with no rehearsal, replacing the ailing Bruno Walter. His success made the front page of the New York Times, a rare position for a classical musician these days. He was a composer, writing in all genres from sacred music (Mass) to Broadway musicals and symphonies to ballet. He was a skilled pianist, He was a talented music educator – leading a long series of Young People’s Concerts for television and doing other television arts programs – his first one was on Beethoven’s Fifth Symphony with live orchestra.

In 1957, however he wrote West Side Story, which looked at the contemporary problem of immigrants from Puerto Rico in New York. This was a project that had been on the back burner for years, as a collaboration with the choreographer Jerome Robbins and others. Finally, they changed the idea from “East Side Story” with a Jewish background to a problem they saw in contemporary New York: the gang fighting between the older European immigrants against the new Caribbean immigrants. And so we have the Italy-Polish Tony, a Jet, versus the Puerto Rican Bernardo, leader of the Sharks. Note the symbolism in their gang names: mechanism versus nature. Because of the influence of Robbins, the dance sections of the musical assumed a greater importance than usual and in 1961, Bernstein took those sections and created the Symphonic Dances from West Side Story.

These dances from the musical are included in the suite: The Prologue, a rivalry between the Sharks and the Jets; Somewhere, a dream sequence in which the two gangs are friendly; Scherzo, a continuation of the dream, as the gangs break out of the city into a world of open space; Mambo, a competitive dance between the gangs; Cha-Cha, when Tony and Maria see one another for the first time; Meeting Scene, a short, musical underscoring for their first words together; Cool, for when the Jets anticipate a fight; the Rumble, in which the two gang leaders are killed; and the Finale, love music and a procession that recalls Somewhere but now in a tragic mood.

Although it’s common for the Overtures to be pulled out from musicals, and for the great songs, it’s rare that the instrumental dance sections can be assembled separately. It’s a wonderful tribute to the talents of a great composer that we can enjoy his music this way. His command of the vernacular dance language for the mambo and the cha-cha showed his command of the latest dance forms. The Cha-Cha had only come onto the dance floor in1953 whereas the Mambo had been around since the 1930s. What’s interesting is that, even though the Caribbean protagonists are Puerto Rican, both the Mambo and the Cha-Cha came from Cuba!