Composers Anecdotes
Dancing into the Past
by Maureen Buja August 16th, 2014 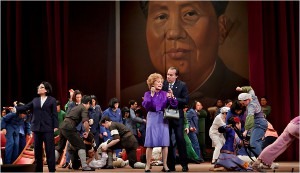 John Adams, born 1947, made the world look at East-West relations in a new light with his ground-breaking opera Nixon in China. First performed in Houston in 1987, the opera took a look behind the scenes of an event of international political importance. One work related to the opera has had a separate existence. The piece, The Chairman Dances, is not taken from music from the opera, but it is derived from early sketches for the opera. Adams himself describes it as an “outtake” from the final act of the opera. It received its première two years before the opera, and gave everyone a flavour of what was to come.

The scenario, written by Peter Sellars and Alice Goodman, isn’t exactly very nice, and takes full advantage of Madame Mao’s previous reputation as a film star: “Chiang Ch’ing, aka Madame Mao, has gate-crashed the Presidential Banquet. She is first seen standing where she is most in the way of the waiters. After a few minutes, she brings out a box of paper lanterns and hangs them around the hall, then strips down to a cheongsam, skin-tight from neck to ankle and slit up the hip. She signals the orchestra to play and begins dancing by herself. Mao is becoming excited. He steps down from his portrait on the wall, and they begin to foxtrot together. They are back in Yenan, dancing to the gramophone… 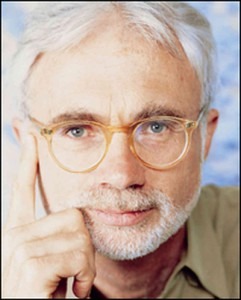 We start with a nervous pulse, and we can imagine Mao presiding over the banquet – smoking his cigarettes. Then comes a change to a hint of a dance piece. But what’s really going on here? The key is in the subtitle of the piece: “Foxtrot for Orchestra.” The foxtrot was the ground breaking dance that replaced the waltz to become the most popular dance in the world. Instead of the waltz’ distinctive three-quarter time, the foxtrot was in four-four. It started its popularity through performances by dancers such as Vernon and Irene Castle and by the 1940s, it was everywhere. When rock and roll first appeared on the scene, it was often described as a foxtrot, namely because of its strong four-four time and tempo. It might have been the modern music of the late 1950s, but you could still foxtrot to it!

When we consider the scenario, Adams’ music and the dance he chose as its centrepiece, we see that everything is a look back in time: Madame Mao’s position is no longer on the periphery – she puts herself back into the centre. She wears the dress, the qipao or cheongsam, that was popular when she made her name in the world as an actress in Shanghai films. And she does the foxtrot. She dances the most popular dance form of the day – but that day is long gone. You can see this as the signal that all will be changing – once you start to recreate the past, you lose your way to the future.