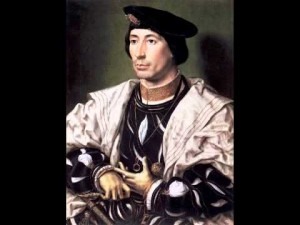 On occasion, composers and artists have some very peculiar habits or eccentricities that border on insanity. Erik Satie ate only food that was white in color, Richard Wagner enjoyed cross-dressing and his daily enemas, Anton Bruckner had an obsession with counting objects, teenage girls and human skulls, and Arnold Schoenberg had an irrational fear of the number 13. Every single one of these famous composers was called “crazy” at one point or another. In the case of Alexander Agricola (1446-1506), composing almost 500 years ago, the “crazy” label was exclusively applied to his compositions. Although highly regarded—and apparently without peculiar eccentricities—critics and contemporaries simply did not know what to make of his music. His very distinctive style, often employing extremely dense counterpoint and the manipulation of the underlying pulse at cadences, was deemed “irrational and bordering on the fantastical!”

Alexander Agricola: Missa In myne zin, “Agnus Dei”
Agricola first stormed onto the international musical scene in the 1490’s. His particular claim to fame was a series of instrumental variations on famous secular songs. These three-voice chansons were highly popular with amateurs and professionals alike, and first circulated in hand-written copies. With the advent of music printing—instigated by the Venetian publisher Petrucci—Agricola’s fame soared to new heights. In all, roughly 80 songs and secular instrumental pieces have survived. His instrumental variations rely on a highly detailed texture, with repeated sequences and rhythmic motives busily propelling the musical discourse. Full of variety and ornamental figuration, it’s hardly surprising that these pieces became popular favorites.

Alexander Agricola: De tous biens plaine, No. 5
No. 3
No. 2
No. 1
Alexander Agricola was born Alexander Ackermann in Ghent, and spent most of his life in various posts in France, Italy and the Low Countries. Chapel records place him in the service of Duke Galeazzo Maria Sforza of Milan between 1471 and 1474, followed by a short stint with Lorenzo de’Medici in Florence. Apparently, Agricola returned home to serve as a singer at Cambrai Cathedral in 1476, but then he simply disappeared for a number of years. Presumably, he spent some time in the French royal chapel, and by 1500 he took a position with Philip the Handsome, Duke of Burgundy and King of Castile. Philip was not only handsome, he was also an avid traveler, and Agricola accompanied his patron to various parts of France and Spain. At the height of his fame as one of Europe’s most esteemed composers, Agricola died on 15 August 1506 in Valladolid, Spain, during an outbreak of the plague. His succinct three-voice motet Si dedero (I shall not give sleep to my eyes, nor even close my eyelids) was the most-copied work of its generation, as well as a popular model for other settings and a younger group of composers.