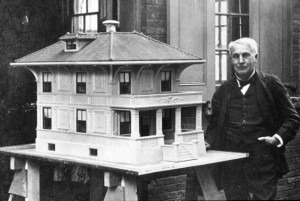 The contribution of Thomas Alva Edison to modern life is so enormous that it is difficult to appreciate! He registered a grand total of 1,093 patents, including numerous telegraph machines, the first voice recording and playback system, the phonograph and subsequent improvements, and the first moving-picture camera. His most famous invention, the practical light bulb, was accompanied by a multitude of lesser-known technical devices and equipment that needed to be developed in order to produce electricity on a grand scale. He also made significant contributions to the development of the typewriter, batteries, X-ray plates, electric cars, trains and railways, electric pens, fire alarms, warning lights, gas masks, underwater devices for submarines, electroplating and the concrete piano! Your eyes are not deceiving you, and this is no April Fools! Edison did indeed envision a piano made of concrete, although it was never patented. 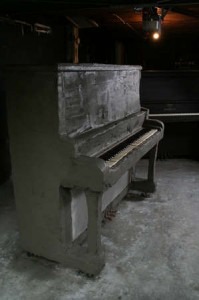 One of Edison’s many talents was the application of knowledge and processes to novel situations. By 1881, Edison had formed the Edison Ore-Milling Company, which employed a number of his invented ore crushing technologies. Despite continual investment in the business, the company eventually failed to the tune of several hundred million dollars. However, the manufacturing process used by the Ore-Milling Company produced large quantities of fine sand, particularly suited for the production of concrete. Always looking for an application, Edison went ahead and sold the waste sand to cement manufacturers, and by 1899 he decided to get into the cement business and established the Edison Portland Cement Company. Putting his genius mind to work, he quickly improved the efficiency of cement production and invented a lightweight “foam cement” by injecting air into the mixture. The new product was a sensation, and the licensing of the process eventually lead to overproduction in the industry. So Edison had to find alternate uses for his Portland cement. You can see where this is going!

Edison believed that concrete was a relatively inert, strong, and highly moldable material that had a wide range of applications. He quickly set to work and improved on formwork molds that could repeatedly be used to create houses entirely made of concrete. As many as three stories tall, these affordable houses came complete with cement bathtubs, fancy decorative ceilings, molded window sills and other ornamental features. In an interview in 1906, Edison said, “If I succeed, as I feel certain I will, the cement house will be my greatest invention.” But Edison did not stop there. He suggested that phonograph consoles, tables, chairs and even pianos could be cheaply produced with concrete. Edison had always been interested in music. The phonograph was an expression of his belief that music was of inherent value in life. “Music is so helpful to the human mind that it is naturally a source of satisfaction to me that I have helped in some way to make the very finest music available to millions.” With his concrete piano, Edison attempted to turn America into a musical nation, “think what a beautiful, marvelous America this would be were every child taught music.” The concrete piano would still house a wooden soundboard, but the concrete exterior molded with ornamental embellishments would somewhat dampen the resonance. Believe it or not, a piano company briefly produced concrete pianos in 1931, but the public eventually rejected Edison’s musical cement dream. However, he still got to build the entrance to Yankee Stadium in the 1920’s. The plight of the inventor, Edison once said, “was to try to meet the demands of a crazy civilization.”