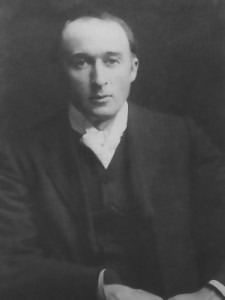 Frederick Delius (1862-1934) was a rare English composer with an international outlook. Born in Bradford, England, to a family who had emigrated there from Germany, he spent 2 years in Florida in his early 20s, and shortly thereafter began composing. He studied composition formally in Germany and then settled in France for the rest of his life (excepting a move to England during WWI). The greatest part of his pre-War career took place in Germany, with extensive performances of both his orchestral and vocal music, including his operas Koanga and A Village Romeo and Juliet.

In 1916, he wrote his only Violin Concerto. Unlike most works entitled ‘concerto,’ that pits the violinist ‘against’ the orchestra, this work is more like a violin rhapsody with orchestra. The conductor Sir Thomas Beecham wrote that ‘It is admirably planned for the solo instrument of which he had an intimate knowledge; it has considerable melodic beauty and is structurally entirely logical and effective. It also bears the stamp of genuine originality, in owning no resemblance to anything of the sort written by anyone before or since.’ Another conductor, Georg Tintner, thought it was ‘like a wonderful improvisation, something on the spur of the moment. Of course it is totally calculated, but it must not sound like it.’

In this recording, the single movement is divided by tempo changes, which makes it a bit easier to hear what’s going on.

We begin with a lush statement from the violin – a very untypical kind of sound for a violin concerto.

Delius: Violin Concerto: Slower
This section concludes with a violin section that seems to work like a cadenza. Yet, this is a cadenza that’s less about making an impressive showing than a cadenza that’s thoughtful about the first sections. Unlike most cadenzas, however, this is accompanied. The violin sings above the orchestral accompaniment, and at the same time, seems to be alone.

Delius: Violin Concerto: [Cadenza]
For the final section, we return to the opening tempo – the solitude of the cadenza-like section vanishes with the louder entry of the orchestra. Throughout this section, the violin moves to the upper register, until the section closes with some dramatic repeated chords.

Delius: Violin Concerto: Tempo I
The Allegretto has a light, dancing tone in the violin – if we were in a standard concerto, we’d be in the scherzo or a similar dance-based section.

Delius: Violin Concerto: Allegretto – Più moderato
We slow down for the final section. It sounds like the beginning of the work has returned – statements of quiet drama, an interplay between the violin and different sections of the orchestra. At the end, the violin is just a whisper of sound.

Delius: Violin Concerto: Broadly
The work has fallen out of the standard repertoire for two reasons: it is virtuosic but not bravura. In other words, it will require a great deal of effort for the violinist to conquer the piece, but there are few opportunities for the player to show off. Even in the ‘cadenza’-like section, there are no great runs, fiery repetitions, but rather a section that’s about the violin, not the violinist. The work ends not with a great fortissimo flourish but pianissimo. The audience will sit in stunned beauty, rather than rising to its feet with waves of crashing applause.