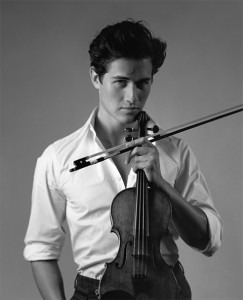 Charlie Siem is one of very few violinists to have undertaken solo tours to Norway and Holland, be the centrepiece of a dedicated Buzzfeed article, and have modelled for Vogue, Armani and Boss.

Actually, make that the only violinist.

Who else can say they’ve collaborated with Sir Roger Norrington and been photographed for Dior?

Charlie attended Eton College and then went on to study music at Cambridge. His passion for the instrument kept him determined during his intense studies; with very little of the degree mark comprising performance, it’s easy for practice to fall by the wayside in favour of essays.

‘It was a challenge balancing my violin studies outside university, but I’m retrospectively grateful for it’, he recalls. By this point, he’d already been involved with music for around fifteen years, having learnt the violin all through his childhood. 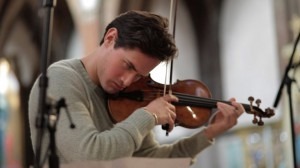 Neither of his parents were musical – were they supportive of his career choice?

‘They were in and out. They’re not musicians, so they were excited that they had kids that were enthusiastic. But then I started getting so into it that they started to think it was unhealthy – but I convinced them!

‘The violin’s always been an essential aspect of my life since I was a kid’, Charlie explains. For him, it’s more than simply a ‘job’.

‘The violin goes beyond just choosing a profession, it runs deeper than that. It’s amazing I can support myself by playing the violin. I can’t live without it, so whether or not it’s my profession, it’ll remain the core of my life.’

At this core rest the great works of the violin repertoire, which Charlie finds himself performing regularly all over the world.

‘It’s a challenge for all musicians, playing repertoire in a world that often wants to hear the same things. Tchaikovsky, Mendelssohn, Bruch – you just have to get used to the fact that you’ll be playing this a lot, and to constantly have a fresh perspective.

‘You somehow have to rub your eyes again and again, see it all with fresh eyes. I’d be lying if I said I did it all the time, but if I end up hearing something I don’t like I go back and make more of an effort next time.’

The repertoire is not the only thing that has survived over the ages – the instrument itself is something to which Charlie feels a strong historical connection.

‘The violin has been the same wooden box for hundreds of years – you get this nostalgic feeling when you play, and even the way you study it connects you to 200 years of tradition. On that scale, 100 years seems recent. ‘Modern’ violin technique is 100 years old!’

So in between his international concerts and various photo shoots (he has one in Paris next week), what does he do to relax?

‘I read, I listen to a lot of music, I go to the cinema – stuff that everybody does really!

‘You always face a choice about how to spend your time. You make time for things, no matter how busy you are – there are people with 9-5 jobs who squeeze in a lot, both before and after work!’