An engaging young woman strode onto the stage. Chen Yi took the microphone from its stand and spoke enthusiastically to the audience about Sound of The Five for Solo Cello and String Quartet which was about to be performed by members of The Saint Paul Chamber Orchestra at Ordway Theater in St Paul. As the composer began to speak I glanced at the program book. The movement titles sounded intriguing—Lusheng Ensemble; Echoes of the Set Bells; Romance of Hsiao & Ch’in; Flower Drums in Dance.

The performers Richard Belcher, solo cello, Kyu-Young Kim and Eunae Koh, violins; Hyobi Sim, viola, and Joshua Koestenbaum, cello, had their work cut out for them. A rhythmically complex work, with unusual technical demands, this piece features the cello, but also emulates Chinese traditional instruments. After the performance, I had a chance to catch up with the composer to talk about her work.

Tell us how you came to write this piece. 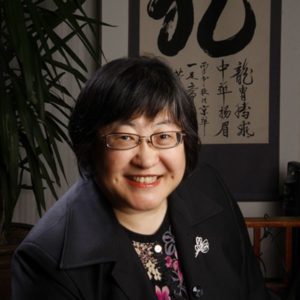 It was a commission from Eastman School for Mini Hwang and the Ying Quartet, to be featured, as the Asian professors on their faculty. I have written a lot for the cello and love it. You could tell from my work list. This piece aims to imitate the sounds of traditional Chinese instruments— a bamboo mouth organ, set bells and seven-string zither. I’ll tell you about these instruments.

Lusheng is an ancient bamboo mouth organ. Villagers of Southwestern China often play in lusheng ensembles to celebrate spring holidays. The instruments of the lusheng family ranges from soprano to bass voices, and the instrument size varies from 12 inches long to about 23 feet. The instrumentalists perform intricate dance steps while playing. The chords in movement I sound like the Lusheng playing.


Set bells can be traced back to pre-Qin period (Shang Dynasty, c.16th century-11th century B.C.). Made from bronze, each bell produces two tones, forming either a major or minor third, or major second. A set might include from three to sixty-four bells. The harmonics of the strings in the second movement imitate the set bells.

II. Echoes of the Set Bells 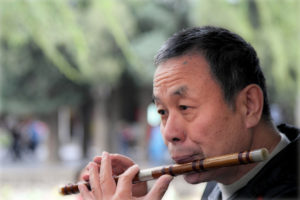 A two-thousand-year-old 7-string Chinese zither, the Ch’in has a prominent role in the history of Chinese music and literature. Its unique sounds are fashioned by both hands, utilizing distinctive fingerings to pluck and produce vibratos. These two instruments, played together, result in fascinating sonorities and timbres. The guqin plucking sonority is imitated by the cello pizzicatos in the third movement.

With membranes on both ends, the Flower drums hang on the performers’ waists so they can dance to the dynamic rhythms. There is a great drum tradition in China. In my last movement, the Chinese folk percussion ensemble patterns are imitated by all 5 stringed instruments and with the cello cadenza intensifying, increasing to the climax of the piece towards the end!

Ringing harmonics, eerie glissandi, pizzicato snaps, and the last movement full of spiraling energy, I could see how challenging it was to play! Were you pleased? 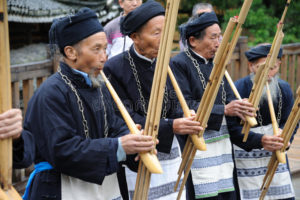 I really loved the excellent performance of SPCO, which was full of energy and color, so delicate and precise, vivid and powerful.

What are you doing next?

I am flying out to China (Shenzhen) for visiting professorship work and Beijing for judging an international competition. The work will be intensive. I’m currently writing a piano solo, and a clarinet concerto now. I had a busy 2019, with three works premiered—Introduction, Andante, and Allegro by Seattle Symphony, WA; Premiere of Fire for 12 players by Grossman Ensemble, CCCC, Chicago; and Premiere of Plum Blossom for piano solo, 5th Hong Kong International Piano Competition, in Hong Kong. Another recent privilege, was to be Composer in Residence at Curtis Institute of Music. They featured a whole evening of my music in December of 2017.

You’ve had an extraordinary life. Can you tell us about that?

My parents, both medical doctors, loved classical music, and my siblings and I were trained from 3 years old. We had a huge collection of long-playing records and CDs. I loved Mozart and Bach and Beethoven. I started piano first, and when I was 4 began violin lessons. We had a happy life, when I grew up in Southern China. We went every week to the orchestra to hear foreign classical visiting ensembles. But the Cultural Revolution began in 1966. Classical music was prohibited. We’d shut the windows so I could practice hidden with a very heavy mute on my instrument, and I used a heavy blanket inside the piano. If you were discovered you could be taken to prison and severely punished. At age 15, I was sent to be a farmer for two years. I smuggled my violin with me. We lived with the farmers and often we were forced to carry 80 pounds, sometimes 20 times a day up the hills and help in the fields. When I had a moment, I played revolutionary songs, which the farmers enjoyed. This is how I kept practicing! Absorbing an improvisational way of playing was I think, the beginning of my composing. There I first heard traditional Chinese instruments and their songs. Chanticleer Chinese Myths Cantata is based on a tune I recorded from a small village sung by an elder man. A story told about how the earth was formed.


After the cultural revolution, I was brought back to the city to play violin in the Beijing Opera orchestra, I was 17. When the Beijing Central Conservatory was allowed to re-open in 1977, there were 20,000 applicants. I was one of 32 chosen. When I became a freshman, age 20, studying to be a composer meant, in addition to western music training in orchestration, harmony, counterpoint, analysis, history, and ear-training, strict tuition in Chinese traditional music, including Chinese instrumental music, opera, folk traditional music, and a style of storytelling. 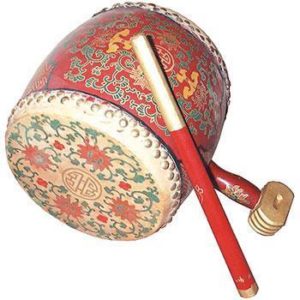 After I finished my master degree in 1986 I was admitted to Columbia University School of the Arts. It was a turning point to go to New York for my doctoral degree. I learned so much from this great melting pot—from jazz, classical concerts, the clubs, the bars, and on the streets. But I went back deeply into Chinese culture to ask—what is my original voice? I realized, Chinese and the dialects, my own native tongue and identity, is deeply related to my music and affects the style, temperament, and spirit of my music. I collected folk songs from different minority groups throughout China. I researched the instrumental techniques I’d learned in the Beijing opera orchestra—the unique bowing techniques, fingerings and styles, which I played many years—and the textures and complicated rhythms, find their way into my music.

Thinking of My Home is based on an ancient Chinese poem by Li Bai for three-part treble voices. The piece blends Chinese and Western music in an evocative way. It was commissioned and published by ChoralQuest© of the American Composers Forum, whose mandate is to expand the repertoire of new music for middle grade and junior high choirs.

Since 2006, you and your husband Zhou Long have been professors of composition at the University of Missouri–Kansas City Conservatory of Music and Dance. How do you work?

I compose quietly! Our two-composer household, we teach at different times during the day and we write at night. We don’t make noise since we use electric keyboards with headphones.

Composer Chen Yi has influenced scores of musicians and those who come in contact with her consider her an icon, and an extraordinary human being. She is a strong advocate for music’s power to connect audiences of different cultural backgrounds, and her magical music does just that.