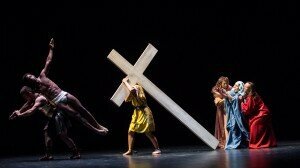 Geneva is an unusual place. Set on a stunning lake at the Swiss-French border and surrounded by hulking dark mountains, its city center is dominated by banks and jewellers. Hotels and restaurants are notoriously overpriced, as is pretty much everything else in this city with a strict Calvinist work ethic. In the winter months the Genevois confidently catwalk their fur coats as if PETA didn’t exist. And of course, the furs find their way to the opera, even in its current and decidedly unglamorous provisional setting.

With the main theatre from the late 19th century undergoing extensive renovations, the opera company has decamped near the United Nations to a provisional wooden structure that is more redolent of an alpine ski lift station than the urban high society Grand Théatre Genève. Seating at the so-called Opéra des Nations is generous and comfortable. Acoustics are clear if occasionally imbalanced, causing the strings to wither and the brass to shatter, giving the highly accomplished Orchestre de la Suisse Romande a slightly tinny sound. 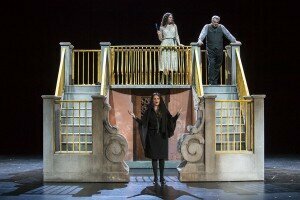 Conductor Alexander Joel whipped along the orchestra with energy at this verismo double bill of Cavalleria Rusticana and I Pagliacci, a new and joint production with the Teatro Communale di Bologna.

In line with the sparse design of the temporary theatre, the sets of both operas were minimal, each by a different director and set designer. Cav’s team under director Emma Dante relied on three movable staircases with some Sicilian design elements, combining them with over-the-top catholic symbolism. A black Jesus carrying a white cross, and a Roman legionnaire with a whip made an appearance. Black costumes were contrasted with colourful fans, and skimpily dressed female dancers pranced like horses pulling a carriage. The production came off as silly, provincial and clichéd.

Pag, however, under the direction of Serena Sinigaglia, showed simplicity used to extraordinary effect. Using a raised wooden stage structure and cleverly surrounding it with only shrubbery or chairs, the stage designer created an astoundingly effective yet certainly budget-conscious setting for a thrilling drama. 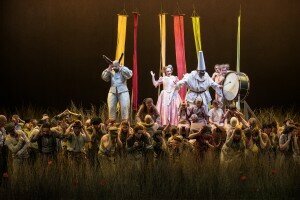 The singing throughout both operas was of high quality, with the chorus of the Grand Théâtre enthusiastically setting the fast pace.

Oksana Volkova’s Santuzza was vocally strong and secure, voluminous and precise. She was oddly paired with the significantly older Marcello Giordani as Turiddu. Though his voice is clearly not the youngest anymore, he was in exceptionally good form, delivering a veritable lesson in heartfelt italianità, and boasting a mellifluous middle range and tantalizing high notes. Solid performances were given by Stefania Toczyska as Mamma Lucia and Melody Louledjian as Lola. Russian baritone Roman Burdenko sang a compact Alfio and transitioned remarkably well into Tonio of Pagliacci, offering a riveting opening act Prologue. 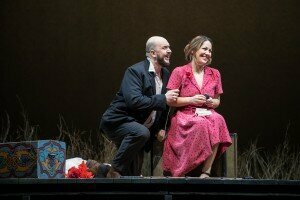 Nino Machaidze as Nedda delivered some star power with her engaging stage presence and highly distinctive soprano, and was well paired with Mexican tenor Diego Torre. He possesses an instrument of striking beauty in the top notes but is less even in the middle register. Markus Werba was a charming Silvio, Nedda’s illicit young lover. Young tenor Migran Agadzhanyan, a member of the theatre’s young artists in residence program, put in a standout performance in the small role of Beppe, the Arlecchino. This is a voice one would hope to soon see in a larger role.

A calm and disciplined audience of locals and regulars enjoyed the evening and didn’t seem to mind that programs were sold for SFr 16 (USD17). Only in Geneva.