Composers Inspiration
By the Light of the Silvery Moon
by Maureen Buja September 13th, 2019 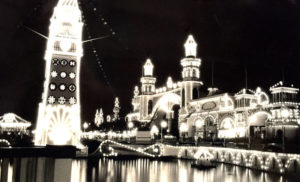 The turn of the 20th century saw a surprising number of Moon songs. It also saw the first amusement park devoted to the moon: Luna Park in Coney Island, New York. That original Luna Park, which opened in 1905, was the inspiration for nearly 30 other Luna Parks in America and another 50 or so around the world from Egypt to Japan and Buenos Aires to Melbourne. Some of them are still open today.

In 1901, the musical extravaganza The Sleeping Beauty and the Beast opened on Broadway and ran for 7 months before decamping to start its London tour. One song that was in the musical on its opening, but which was later dropped was a light love song, “Nobody’s Looking But De Owl and De Moon.” Despite its removal after the opening, the song went on to have many different recordings and editions.

Also on Broadway, the romantic musical comedy The Mocking Bird opened in 1902 and also included a Moon Song in its closing numbers. “What’s The Matter With The Moon Tonight?” was recorded by J.W. Meyers, a Welsh baritone singer who’d been touring the US since the early 1890s.

In 1903, “Lazy Moon” took over in the moon category. Another song by Cole and Johnson, it is yet another love song, with the two lovers pleading for the moon to appear.

In 1905, Albert von Tilzer brought us a cautionary tale from the other side of the love duet – where she’s warning him to behave because “The Moon Has His Eyes On You.” 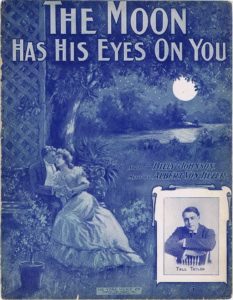 “The Moon Has His Eyes on You” sheet music

In his 1906 operetta, The Red Mill, Victor Herbert put two American vaudevillians stranded in The Netherlands in the way of an innkeeper’s plans to marry off his daughter and mayhem ensues. At the end of the first act we have a duet between the daughter and her secret beloved, “Moonbeams,” where she asks the moon to find her wandering love.

Not from a show, but a piece of music written separately for playing at home, Herman Finck’s Moonlight was a perfect piece of parlor music, as it was known. 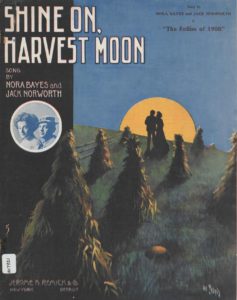 The two most famous of these early 20th century Moon Songs were 1908’s “Shine on Harvest Moon” and 1909’s “By the Light of the Silvery Moon.”

“Shine On, Harvest Moon” made its debut in the 1908 Ziegfeld Follies and remains in the repertoire over a century later. Yet another love song, here the lover pleads with the full moon to shine so that his lover, who is afraid of the darkness, won’t leave him and go home. He’s anticipating the long dark winter evenings, so an obliging harvest moon would be just what he wants.

“By the Light of the Silvery Moon” made its debut in the Ziegfeld Follies of the next year, 1909, and remains in every one’s repertoire – the felicitous combination of Moon/ Spoon/ Croon/ June in the opening 2 lines made it memorable and full of wishful thinking.

Other Moon Songs from 1909 include “It’s Moonlight All The Time On Broadway” and “When It’s Moonlight On The Prairie,” so it’s clear that there was a moon-fascination in the early 20th century. 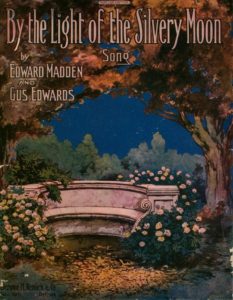 “By the Light of the Silvery Moon”
sheet music

Naughty Marietta was another of Herbert’s pseudo-historical concoctions, full of songs such as “Tramp, Tramp, Tramp” and “Ah! Sweet Mystery of Life” that took on their own life after the show closed. “‘Neath a Southern Moon” starts as a song requesting the fortune-telling cards tell the heroine’s future, but it’s underneath the Southern moon that she will find her love.

Moon – Spoon – Croon – June. The rhymes that live on from music from a century ago and above it all the moon shines forth.