Artists Interviews
Building a Sound: An Interview with the Takács Quartet
by Maureen Buja August 31st, 2016 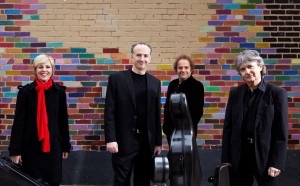 Ahead of their appearance in Hong Kong, we caught up with the Takács Quartet and asked them a few questions about their long career and what they saw for the future. Takács Quartet is Edward Dusinberre, first violin; Károly Schranz, second violin; Geraldine Walther, viola; and András Fejér, cello. The group first came together in 1975 in Hungary under first violinist Gábor Takács-Nagy. They moved to the US in 1983 where they have been the Quartet-in-Residence at the University of Colorado at Boulder. We asked them about this relationship, which has lasted over 30 years, and they said that it enables them to take advantage of the unique breadth of the American university system. They teach students, and, at the same time, are able to build up their repertoire as well as travel and concertize around the world.

Since their travels take them from university campuses to the greatest chamber music halls of the world, such as Wigmore Hall or at Carnegie Hall, we asked about the differing audiences for the different kinds of halls. They found it a great adventure playing in different halls and said that the audience varies in each place. They noted that some halls have a tradition of chamber music and have an audience for that repertoire that has been there for generations, especially in places such as London, Paris, Florence, Bilbao, and Budapest in Europe. In the US, New York, Boston, and San Francisco, to name just a few cities have that same devoted chamber music following Edward Dusinberre, the first violinist, has just written a book Beethoven for a Later Age. We asked the quartet if this had changed the way that the quartet approaches or thinks about the 16 Beethoven quartets. They said that they’d been playing Beethoven’s quartets for a long time, but Beethoven for a Later Age gave them a blood transfusion – new life. It has broadened their views regarding Beethoven’s age and how his music created new boundaries. They also found interesting to read about their own rehearsal methods and to hear their own anecdotes from a new angle.

We asked about their recent recordings, which have expanded the Quartet into the world of Quintets. We asked them how they felt that the dynamics of a group shifts or changes with the addition of another voice. They said that they keep a list of artists with whom they work well together and use the opportunity of the extra voice to get new ideas and energy. 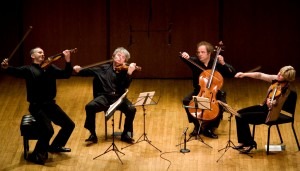 In their Hong Kong appearance, the Quartet will be playing Beethoven’s Op. 18/2 from his early quartets and then two of what are considered his late quartets: Op. 95 and 131. We asked about this repertoire choice and they said that in their view, they connected the Op. 95 with the middle, rather than the late quartets. The concert will become a stylistic overview of the changes that Beethoven made to the string quartet -from his earliest utterances to his last statements.

String Quartet No. 11 in F Minor, Op. 95, “Serioso”
IV. Larghetto espressivo – Allegretto agitato – Allegro
String Quartet No. 14 in C-Sharp Minor, Op. 131
VI. Adagio quasi un poco andante
VII. Allegro
The Quartet has recorded and, in more than one case, made the definitive recording of so much of the core repertoire for the string quartet. We asked them how they saw repertoire going forward. They said that although many musicians specialize in contemporary repertoire, they kept with the classical repertoire, although they usually added one or two new/contemporary premieres each year. These are currently kept solely for their live audiences and, at the moment, they don’t have any plans on recording them.

Over the past 30 years, the Quartet has undergone substantial change since its move to the US, with all the violin and viola members changed. We asked what kinds of things they would suggest for new quartets who reach these stress points. They said that a string quartet is a unique formation and that with lots of work, if you are lucky, you can build up a trademark sound. That sound can ripen like a delicious aged red wine. They said that they have been very fortunate with their personnel changes and have gotten extra impulse and energy from each new player. The other half of this is that, of course, it takes time and you have to be patient to finding the new way.

Their fall concert tour will take them from Singapore to Japan, via Hong Kong, before their return to the US and concerts from California to Washington, DC, to the end of the year. Beethoven is their composer for 2016 so take advantage of hearing a top quartet doing what they do best.

The Quartet will be performing in Hong Kong on September 24th 2016.