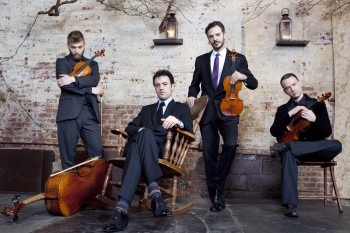 How did your quartet members meet and decide to play in Brooklyn Rider?

Brooklyn Rider is the result of several long-standing relationships: Eric and I are brothers, so we’ve known and played music with each other our whole lives. Nick and Johnny were roommates while at the Curtis Institute of Music. When they moved to New York around 2000, we all started playing chamber music in a variety of settings together. It was immediately apparent that there was good chemistry, and a shared aesthetic vis-à-vis the inherited tradition of Beethoven, Mendelssohn, and Debussy, (etc.) but we also held a desire to expand the boundaries of what a traditional string quartet could do. It still took many years of solidifying friendships; of shared experiences within the Silk Road Ensemble; of summoning the courage necessary to commit to the idea, the band, each other; and finally, of finding a name (maybe the hardest part!) before we became Brooklyn Rider.

How has Yo-Yo Ma’s Silk Road Ensemble inspired the birth of the Brooklyn Rider?

Playing within the Silk Road Ensemble has certainly been a formative influence in the lives of all of us in Brooklyn Rider, but I wouldn’t say it is directly responsible for the birth of Brooklyn Rider. As I mentioned before, the personal and musical relationships of the members of the quartet pre-date the creation of the Silk Road Ensemble, and I believe that we would be playing together regardless of whether we were also SRE members. However, we’ve all been fortunate to gain new perspectives on music, communication and means of expression through our work both with Yo-Yo and all the other Ensemble members. Some of those perspectives include: (a.) A renewed belief that notes written on a page (or even communicated purely orally) tell just part of the story- that whether the music is Beethoven or Kayhan Kalhor (Persian composer/kemanche virtuoso) there’s a structure and if you break it down to its basics, you can unlock a door into their universe. (b.) Know what you know- and then take risks and let yourself be vulnerable in the face of something unfamiliar. Yo-Yo created a sense of trust within the Silk Road Ensemble that encourages experimentation. And the Ensemble members all know a tradition deeply, (Persian classical music, Indian, Chinese, etc.), are generous and willing to share that knowledge but are also curious to learn more about what they don’t know and see if it can translate to their instrument. We’ve tried to take those lessons and apply them to our quartet’s process- of the repertory we decide to play, of how we play it, of how we treat each other within that process.

How do you perceive ‘musical genres’?

I think musical genres, or labels in general are convenient for coming up with one sentence that helps someone picture what something might sound like. And certainly they make separating CDs or records in a store easier (or in today’s online world- “if you like this, you’ll like that”). But they tend to pigeonhole something and miss out on the incredible depth (usually the result of a multiplicity of sources) that goes into making a musical language what it is- which, like spoken language is a living, breathing thing, constantly changing due to the creativity of individuals within a collective.

If you are asked to name one genre that is unique of our time, what would that be?

Rather than name one genre that is unique to our time, I would like to state a challenge of our time: in a fully global world (ease of travel, possibility of hearing music on the internet from anywhere in time or geography more or less), how do we participate in a meaningful way with traditions outside the one we grew up in while continuing to share and develop the one we represent? I would say that within our recording projects (Dominant Curve, Passport, Silent City, Seven Steps) we’ve tried to answer that question in our own way. But it’s heartening to see people and artists all around the world grappling with that issue.

How does the Brooklyn Rider share its artistic beliefs with “Der Blaue Reiter”?

As I mentioned earlier, finding a name is a difficult thing. The four of us in Brooklyn Rider have always looked to the past as a way to move forward. This has included a love of old, scratchy records from the beginning of the recorded era that give us a window into the world of Brahms, Beethoven, Debussy from musicians who either knew those people or were just a couple of steps removed from them. We admired the Blue Rider group (Munich, ca. 1911) for their desire to have dialogue across the arts from painting and visual arts (people like Kandinsky and Franz Marc) to music (e.g. Schoenberg, Scriabin). They also looked outside academic art training and their immediate geography and time period for inspiration. In the Blue Rider Almanac, they highlighted art from the South Pacific and Africa, Japanese drawings, medieval German woodcuts and sculpture, Egyptian puppets, Russian folk art, and Bavarian religious art painted on glass. But we didn’t want to call ourselves the Blue Rider Quartet because we live in a different time and place and wanted to honor that too- Brooklyn!

Other than crossing genres, is there anything else you are working to change in the climate of modern music scene?

Since forming Brooklyn Rider, I have been composing and arranging quite a bit. We recently wrote our first collaborative composition, Seven Steps, which is the first track on our album of the same name. We are not alone in the desire as performers to engage in the creative process. More and more musicians with “classical” training both within groups and as individuals are trying to connect more with audiences, themselves and the tradition we come from (Beethoven, Mozart and Bach were performer/composers/improvisers). This seems to be a healthy thing that will hopefully create a better ecosystem when the composer/performer/audience triangle isn’t as separate as it may have been in the last century. Some examples: Carla Kihlstedt, Christina Courtin, Michi Wiancko, Rubin Kodheli. Pekka Kuusisto, Mike Block, Alex Sopp, Giovanni Sollima, Y Music, Now Ensemble.

Personally, I am curious on the violin/viola bowing methods that some of your members adopt. Does this bowing give you a better control of your genre-defying repertoires on the modern instruments?

I think you might be referring to Johnny’s bow hold in which he holds the bow closer to the balance point rather than at the frog. This was something he came to in order to have greater control over articulation and specificity of attack- and actually something he came to before we were even in the Silk Road Ensemble. So it was actually a response to his search for ways to express what was in his ear and head in terms of the “classical” repertory- not necessarily “genre-defying” repertoires. A fringe benefit for him has been that a lot of the music we play that has gone outside of the classical rep engages in some sort of fiddling tradition in which having a lighter feel in the hand allows you to do all sorts of fun rhythmic things with the bow and doesn’t require you to use the whole stick. What’s funny about it is that even though Johnny has had less stick length to use, I still feel like I’m learning from him how to sustain a line better. One additional thought goes back to an earlier point about learning from the past- if you look at photos/drawings of people like Louis Spohr, they hold the bow in much the same place as Johnny. I think where one holds the bow, like many things in our age, has become overly standardized and while teachers need to have a basic system in place, they should be flexible to the individual physicality of their students. (Incidentally, recently Johnny’s been trying out the frog again.)

(To Colin and Eric Jacobsen) What is the ambition of The Knights against mainstream big orchestras (and their programme)?

The Knights do not have an ambition against mainstream big orchestras- we admire what many of them have achieved and are able to achieve. However, we do believe there are other ways to go about making music as an orchestra in the time we live in. Our rehearsal process is more like a chamber music group in which the floor is open to comments and all are free to contribute ideas to the conception of a piece. Eric is our conductor, (though we play some rep without conductor) and ultimate arbiter when an impasse is reached on interpretation. He comes with his own ideas based on extensive study, but does not shove them down people’s throats. He acts more as a catalyst for mutual understanding than a dictator. Within The Knights, there are people with many different talents and interests. Some have extensive early music/period practice backgrounds. Some play a lot of contemporary music. Others are interested in jazz, or are singer/songwriters, or are composer/arrangers. We try to let people shine and contribute as much as possible within the orchestral context.

As one of the pioneering ensembles in classical music, what is the future of the genre in your opinion?

There is much to be optimistic about in the world of classical music at the moment. It seems as though more and more musicians are aware (and have to be aware) of a bigger picture of how music fits into society. There’s greater creativity being exhibited by performers both on their instruments and away from them (ie more composing/arranging, more creation of unique projects, unexpected venues, chamber music festivals, letting in influence from popular music, non-western music). On the negative side, arts funding, and in particular arts education funding, seems like one of the first things on the chopping block whenever the economy heads south. So as classical music tries to become less elitist on one level, it faces a future in which a smaller and smaller portion of society might have a base level of understanding/exposure. Fortunately, many organizations and people recognize this problem and are trying to do something to address it. Within our experiences as Brooklyn Rider, some of our most fulfilling times have come in residencies when we get to sit in a community for a week and visit schools and work with students before playing a concert. (For example, we did a residency a couple of years ago in Central Florida through the Bach Festival Society and a Gift of Music that allowed us to work with over 250 students and we will return this November).