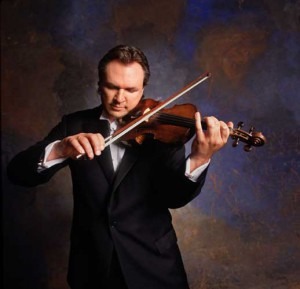 Apart from his numerous accomplishments as a child prodigy, Grammy-winning jazz/folk/classical violinist and composer Mark O’Connor has been one of the pioneers that cross genres in his music making. This year O’Connor joins Bright Sheng’s Intimacy of Creativity and introduces his influence atop classical music to audience in Hong Kong. During the interview, the legendary violinist reveals more about his personal background as well as his philosophy of creativity.

Would you prefer being called a fiddler or a violinist?

On most of my albums, I put ‘Mark O’Connor, violin’. Sometimes I would put “Violinist/Fiddler”, since I work on both classical and jazz music, although I feel more comfortable with the former.

Most jazz and folk musicians are aurally trained and they might not agree with classical music training. What is your stance on this?

I write my own violin methods. I am trying to unite these worlds you speak of- jazz, folk and classical. We are missing out a lot of opportunities, not because of style and preference, but by means of training. If we are trained in a holistic way, (Some of my books deal with creativity and others with music writing. I also try to engage students with aural training from an early age on), then there will be someone like me- as I am basically a product of my own methods: my mother was very curious on jazz, folk and classical music; and I had five different teachers on guitar, piano, jazz, theory, fiddle etc. So I was able to combine all of these as a child. It was an inclusive training in which you would acquire the techniques to play whilst being aurally attentive to everything around you.

If the student is at age 3-5, I suggest aural training be given first. If the student is reading words already, then half aural and half score training. By the time children turn 12 and enter middle school, I want them to be able to both read scores and play by ear. Of course it also depends on a student’s personality. Instead of letting a student’s weakness hold him back, we should enhance his strength. The main thing is to progress as a player. Music is in all of us, no matter what occupation you are. My biggest wish is to have doctors and nurses keep playing music, because I believe that would make them better doctors. I do not want to see children hating the violin and then quitting music when they grow up. I believe my method will help keep music living. If more people have music in their life, there would be a lot less problems in the world. Music is the highest calling that brings people together and heals racial tensions.

You mentioned Chet Atkins showed you a recording of an old blues singer, which you had thought to be sung by Hank Williams. Unfortunately you had never heard of that ever since. In that sense, do you think jazz or folk music depends too much on aural tradition and lacks a systematic preservation?

Of course, that was just one of the many examples. It is true- which is why I am writing my own things down. See, we have a tremendous advantage in the twenty-first century: CDs and scores. A hundred years ago, we did not have the luxury. Back in Beethoven’s time, it costs a lot of money to engrave music for someone else to read it. Today, computers make it possible for us to disseminate music all over the world. We have great opportunities to preserve music and to learn.

As an improviser, you just want to live in the moment. Let’s say, you are talking with a friend about your day and your family. But then one day you had a more profound conversation with your friend about deeper philosophical topics. The first kind is just like improvisation- we just want to do it and then forget about it. You don’t want to hear tapes of every conversation you have had. Then once in a while, you get an improvisation that just transcends- “Wow, that’s really good. We should record it.” But I think part of the improvisatory spirit is that: it’s not supposed to be recorded down. It’s just about the talent to express yourself in that moment which you will never be able to do quite the same thing again- that’s improvisation.

Having directed music camps, published method books, performed extensively around the globe etc., what is the next breakthrough in your career?

I have been a full time musician for 35 years, having recorded around 37 solo albums. Writing my own methods is my latest big project, which I am currently half way till publishing the entire collection. It will take five or six more years to complete, so it is very difficult for me to foresee from this point. However, I do wish to publish my autobiography soon. The writing process will start in September for around nine months, and the content will be covering my childhood. I was a child musician, so I had very wild stories. My childhood was very extreme. It took me a long time to get over the ups and downs before pursuing my life as an adult musician. I used to put aside that period of my life until now I have decided to dig deeper into it. This is a project I’m little nervous about since it involves myself as well as old people who used to be around me that have passed away- and thus not being able to defend themselves.

When I first moved to New York City five years ago, I had several projects in mind. Some of the major ones like recording a symphony album and writing my own method books have been achieved, and publishing an autobiography would be next. I think my career model, ie., crossing genres, can be quite helpful to this era because the current market does not allow a musician to focus on just one genre. If my autobiography is well written, I am sure it would be an inspiring story.

What is the most important thing you have learnt from all your mentors?

Learning to travel. You have to feel as if being away is your home. As a musician, you play for people all over the globe and so a supportive family is very important. I was married one time, and I still remembered every time it was very sad for me to leave my family. It was like a bad thing that I had left for my concerts. But shouldn’t this be a celebration that I actually got the opportunity to perform? My mentors taught me that music is my friend. It is something you can rely on, something that can be nurtured with love and shared with people. In that process, your music is not that much about you anymore- it’s about your responsibility to others. My music is a shared music- I’m just like an actor in a play.

Another thing I learnt from my mentors is that they drew from diversity in every aspect of their life, be it geographically, musically or stylistically. They made that diversity personal before bringing their essence international again. The greatest compliment to me would not be that I have developed my personal style, because that has already been done years ago, but that my personal style is influencing other musicians to become something they never thought they would be.

Marriage seems to be in conflict with the career of musicians. What is your take on this?

I was married twice, had two kids- but that was a while ago. I think if people had approached relationships differently, then sometimes marriage would bring harmony. However I found that although I love my family and my two children- I love them dearly- I need to have some control of my own schedule as I am developing my career. Sometimes I just feel like joining certain music festivals somewhere away from my home, and I just have to leave. I kept thinking, what is my responsibility beyond taking care of my kids? But at the same time, isn’t my music supposed to be shared with people around the world? A lot of people asked me how I could be this successful, having accomplished so many things. That is the sacrifice.