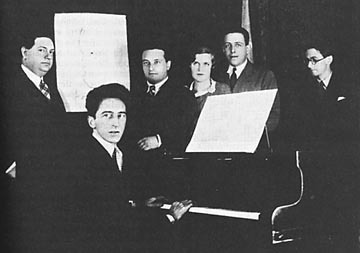 Poulenc’s musical style, thematic materials and even tonal structures build from established musical practices, which are transformed into something unique. The American composer and essayist Ned Rorem concocted an amusing little recipe to explain the Poulenc sound. “Take Chopin’s dominant sevenths, Ravel’s major sevenths, Fauré’s plain triads, Debussy’s minor ninths, Mussorgsky’s augmented fourths. Filter these through Satie by way of the added sixth chords of vaudeville, and blend in a Bohemian way.” His mother, who preferred Mozart and Chopin, and “adorable bad music,” stemming from Parisian popular culture, introduced that Bohemian way to the young Francis. And face it; one could not get any more irreverent than following in the footsteps of Eric Satie.

Among “Les Six” — a loose grouping of six composers who took their musical bearings from the music hall, the cabaret and the circus — nobody sensed the age of Toulouse-Lautrec more innately than Poulenc. “I’ve often been reproached about my street music side,” Poulenc once wrote. “Its genuineness has been suspected, and yet there’s nothing more genuine in me. From childhood onward I’ve associated café tunes with the Couperin Suites in a common love without distinguishing between them.”

Compositions like Cocardes (1919) and the 1917 Rapsodie Nègre caught the attention of Igor Stravinsky, who had the work published at his own expense. In turn, Poulenc was introduced to the works of Stravinsky by his uncle Marcel Royer. The wealthy bachelor uncle nicknamed “Uncle Papoum,” was a frenetic theater and opera fan who took his young charge to live performance of Petrouchka and the Rite of Spring. After learning that the Rite had enthralled his son, his father suggested, “Poor boy, you do have odd taste in music!” 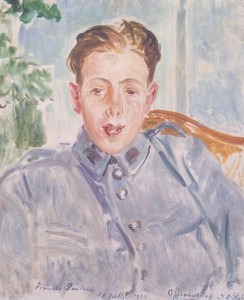 Above all, Stravinsky taught Poulenc about an assumed schizophrenic division into a cultural and a primitive self. This notion readily applies to Poulenc’s sexuality as well.
“Sexual experience is conceived as a source of musical creativity, a romantic notion where cultural will and primitive energies merge.” Poulenc’s Concerto for Two Pianos, alternating neo-classical formal procedures with the use Cabaret elements and eventually the inclusion of the Gamelan, is musically encoding this duality, and intentionally invoking the Symphony of Psalms as well.

The Parisian critic Claude Rostand nonchalantly dubbed Poulenc “half delinquent, half monk — a lover of life, mischievous, ‘bon enfant,’ tender and impertinent, melancholy and serenely mystical.” If the Bohemian way came from his mother, Poulenc inherited the spiritual side from his father, who was a pious Catholic and mainly interested in the music of Beethoven. Poulenc’s deeply religious side is beautifully expressed in the austere beauty of his Stabat Mater, written in memory of his friend, the painter Christian Bérard.

Poulenc’s music and personality mirror the often-conflicting nature of humanity. Simultaneously earthy and refined, a promiscuous homosexual who fathered a daughter late in his life, he was a modern urbane composer who was unafraid to indulge his urges for nostalgia and for mystic spirituality. As a critic once famously remarked, “Poulenc’s music may lie in the gutter, but it is always looking at the stars.”