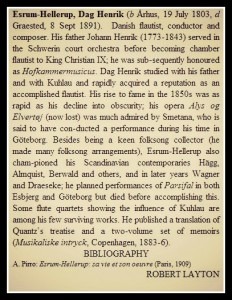 Have you ever come across the composers Gulielmo Baldini and Dag Henrik Esrum-Hellerup? Baldini hailed from the beautiful and ancient Italian city of Ferrara, and his most famous collection of madrigals for 5 and 6 voices was published in Venice in 1574. Dedicated to G. A. Faccinetti, who later became Pope Innocent IX, the music pays tribute to Philippe de Monte, and includes three sacred madrigals. A second collection of spiritual madrigals was supposedly in the pipeline, but if it was ever finished, it has not survived.

Philippe de Monte: “O suavitas et dulcedo” Libro quarto de motetti
Esrum-Hellerup, on the other hand, was a Danish flautist, conductor and composer working in the 19th century. A student of Kuhlau, Dag Henrik acquired a reputation as an accomplished flautist, and his now lost opera Alys og Elvertoj was much admired by Smetana who conducted a performance during his time in Göteborg.
An avid collector of Danish folksong, Esrum-Hellerup championed the music of his Scandinavian contemporaries and his flute quartets show the decided influence of Kuhlau. He also published a translation of Quantz’s famous flute treatise, and a two-volume set of memoirs.

Have you been able to decipher what Baldini and Esrum-Hellerup have in common? Truth be told, they are both fictitious composers and hoax entries in the 1980 first edition of the New Grove Dictionary of Music and Musicians. Mind you, it is only the largest and most authoritative reference dictionary on Western music! Initially, the hoax entries eluded Stanley Sadie, editor-in-chief, who gave the order to print this massive scholarly tome. Apparently, Sadie was rather unhappy when he was made aware of the fictitious entries, and boycotted a second printing until he was certain all made-up entries had been removed. So why would anybody include fictitious entries in reference works such as dictionaries, encyclopedias, maps, and directories? In some cases, it might be used as a copyright trap to reveal subsequent plagiarism or copyright infringement. By including a ghost entry it is easier to demonstrate subsequent plagiarism if the fictitious entry is copied alongside other materials. In the case of the Grove’s Dictionary is was simply a hoax, as the person of Baldini had actually been created by a German musicologist nearly 150 years earlier!